There's Nothing Normal About: TV on the Radio 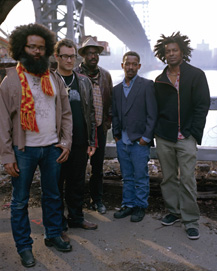 As if it's just another acquired taste, Southern California hasn't yet caught on with TV on the Radio singer Tunde Adebimpe.

“It's beautiful and everything,” Adebimpe says by phone from a tour stop in Pomona, Calif., “but I just don't get it.”

Funny, a lot of people have said the same thing about TV on the Radio's music.

Unlike a lot of modern-rock bands who think being innovative means imitating Radiohead and Wilco, the New York quintet offers a mind-blowingly new sound. Whirring, frayed guitar parts, jagged and jumbled rhythms, splatter-like song structures and Adebimpe's haunting howl of a voice are just part of the unique makeup of the band.

Those components helped TV on the Radio's second disc, Desperate Youth , beat out discs by the Killers, Franz Ferdinand and even Wilco for the 2004 Shortlist Music Prize.

Last month, TVOTR issued its follow-up album, Return to Cookie Mountain , on Interscope Records after coming up on Chicago indie label Touch & Go. The new album is a little more accessible than Desperate Youth , but that had nothing to do with the switch in labels, the singer says.

“The fact that we toured for a year and a half had a lot to do with how this album sounds,” says Adebimpe. “We developed a shorthand on how to do things. We communicated better and had more at our disposal sonically.”

As Adebimpe tries to explain the communication process between the band members – who don't usually stick to one instrument or job title in the studio – he offers a deeper glimpse into how TVOTR really does manage to be different.

“Everyone in the band wants to be engrossed in the music like it's a living, breathing thing,” he says.

“There are definitely cases where a song has been written and somebody dubs it as sounding ‘too normal,' which of course is a completely subjective thing – especially in the case of the five guys in this band. But ‘normal,' whoever is defining it, usually isn't what we're going for.”

The roots of TV on the Radio go back to 2000, when Adebimpe and producer/guitarist David Sitek started painting and recording together in Brooklyn. Their first disc, OK Calculator , was little more than a compilation of experimental tracks they made on a whim.

The CD earned the duo a weekly gig at a nearby club, which is when they picked the name and made it a real band. Guitarist Kyp Malone was added “just to see what it'd be like playing with him,” Adebimpe says. The other two guys joined in the same fashion.

The band's experimental spirit is alive and well in many of the best tracks on Return to Cookie Mountain , including the hand-clapped chant “A Method” and the frantic first single “Wolf Like Me.” Another highlight, “Province,” features backup vocals from TVOTR fan David Bowie. Adebimpe says working with the rock legend “was surreal because it was so normal.”

“He's just a very personable, knowledgeable guy. He was there in the studio just trying to do his vocal part and working hard at it, and I'm next to him thinking, ‘That's Ziggy Stardust. That's the Goblin King from Labyrynth .”

Adebimpe's animation gigs – also including the Yeah Yeah Yeahs' video “Pin” – are just some of the many unusual side projects from TVOTR's members. Sitek has produced other. Malone acted in the 2003 indie film Scumrock . Drummer Jaleel Bunton has been a scenic artist for movies.

“Everyone in this band has something else they should be doing,” Adebimpe says with a laugh. “It's like we're all drawing in the margins in this band instead of paying attention in class.”

The weirder the story gets, the more TV on the Radio starts to make sense.