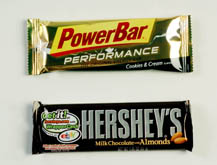 Should it be a Slim-Fast or a Luna bar for lunch, a Clif or a PowerBar before the afternoon workout? Should we go for the Balance bar to stave off bedtime hunger pangs or just munch on a handful of Jelly Belly's new Sport Beans?

The answer may surprise you. The powerhouse of energy, protein and meal replacement bars on the market may serve you well, but only when used correctly and, in some experts' opinions, sparingly.

Although the health and natural food aisles in the grocery store are lined with products, the bars often are misused by well-meaning people who think satisfying an afternoon craving with a Luna bar is far better than having a chocolate chip cookie. But nutrition and health experts say the bars shouldn't be viewed as guilt-free substitutes for unhealthy snacking, and energy and protein bars should be used only by serious athletes.

Liz Applegate, director of sports nutrition at UC Davis and contributing editor and columnist for Runner's World for the past 20 years, says the bars are often not used as intended.

“Not everyone who exercises needs them,” Applegate says. “A lot of people are exercising to lose weight and in that case, you don't want to be eating energy bars. They contain a lot of calories.”

Energy bars were developed in the 1980s as a way to give marathon runners a portable supply of carbohydrates. After several miles on such a long run, runners can deplete their reserves. The bars gave them a boost of carbs in a manageable form.

The market has since expanded, extending beyond the field of athletics and into neighborhood fields and gyms. But unless your body is quickly burning fuel, the extra boost provided by the energy bars just adds pounds.

Pam Wilson, chief clinical dietitian at San Ramon, Calif., Regional Medical Center, discourages people from using the bars. She says that we have turned away from basic nutritional meals and snacks in favor of the brightly packaged bars and drinks. In most cases, the average person is served just as well by water as Gatorade, and some fruit and a turkey sandwich from Subway provide all the protein and carbohydrates the body needs.

“If you're trying to satisfy a sweet craving,” Wilson says, “likely a small amount of ‘the real thing' can do the job with less calories. The bar usually leaves people still feeling hungry and/or deprived.”

But Applegate sees a place in our lives for the bars. Meal replacement bars work for dieters who have trouble regulating their food intake or have problems with self-control.

“You take a person who's overweight and you replace one meal with a bar,” Applegate says, “and they'll lose weight. There's nothing magical about the bar. You're just cutting the calories. The beneficial part is they know that's all they can eat.”

And the energy bars may keep someone from doing the wrong thing – turning to junk food when they're hungry.

Terrie Macfarlane, an avid exerciser, says she uses the energy bars sparingly, but wouldn't be without them.

“I buy them by the case,” Macfarlane says. “For me power bars are a healthier option for a quick fix and have saved me numerous times from visiting the drive-through. They taste like candy to me so I only eat them when I really need to, like before a lunchtime spinning class or after a long hard workout and I don't have access to food right away.”

The market continues to grow for the bars, with new entries all the time. Jelly Belly has come out with Sport Beans, small bags of jelly beans that contain carbs, electrolytes and vitamins. Applegate says UC Davis is involved in a study using the beans. She says they make sense for runners and are essentially a sports drink in a more portable form.

Snickers has released its Marathon bar, a low-carb candy bar that also rates low on the glycemic index. It, too, is designed for athletes and is intended to provide sustained energy.

The key to using any of these products, Applegate and Wilson say, is to know what you're eating and to use them appropriately.