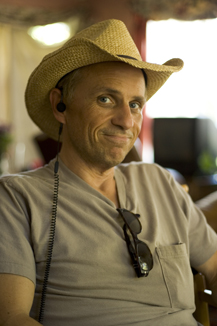 In movie speak, a Macguffin is a plot device that acts as a catalyst for the action, with no centrality to the characters or the plot. When used thoughtlessly, the MacGuffin is little more than a gimmick, but with the right touch, it can be an entry into a film's thematic heart. The MacGuffin in Sleeping Dogs Lie (a title that is witty in at least four different ways once you see the film) is definitely of the latter order.

The opening starts the film's lead, Amy (played with heart and sensitivity by Melinda Page Hamilton) down a path where she comes to terms with the importance and perhaps impossibility of complete honesty in her relationships. While I know that sounds like the synopsis to some estrogen drenched weekend Lifetime special; it works, it's true and it all goes back to the Macguffin – which in this case has the potential to offend or shock the audience in a way that is truly disgusting, hilarious, or both depending on your taste.

The film is a product of writer/director Bobcat Goldthwait (yes, the guy with the weird voice from the Police Academy films), who powered out the script in three days on a comedy tour. At 44, Goldthwait has mellowed considerably, but given the boldness (or perhaps crassness) of this film, he clearly hasn't lost any edge.

The script comes as an extension of Goldthwait's experiences doing stand up. “When I was doing stand up I'd dig a hole for myself and then spend the next five minutes, or the next 45 minutes trying to dig myself out of it,” he reflects.

Writing the script, Goldthwait was interested in the challenge of making a dramatic film from an absurd starting point. He says, “That was the big experiment to see if I could actually write a movie about this topic and hope that at the end you are rooting for this person.”

Part of what makes this film intriguing is the fact that it doesn't just dig itself out of a joke hole with more jokes, but by steadily – dare I say – patiently, building a story from that actually makes you feel something nearing the genuine for all the characters. Goldthwait approached his characters from a point of sympathy, or as he puts it, “There isn't really a character in the movie who I have contempt for.”

While the film certainly has some dramatic weight to it, it is not without its lighter moments, which act as a release valve for the dramatic tension. Sleeping Dogs Lie is that rare case of a seriously funny movie which is also funny seriously. Goldthwait says, “I think lots of times in comedy people jeopardize the reality, they throw out the reality for a joke. Jokes don't really interest me, I'd rather make people feel uncomfortable.”

He sees the film as filling a niche desire for comedies with grown-up complexity. “If you're an adult, and you want to go to a comedy, they only make two kinds: there's the big goofy character driven comedy, or, if you make an indie comedy, it's usually a depressing ending or life is fucked; it's weird to do a comedy for adults.”

Goldthwait has already begun to see the odd range of reactions from audiences accustomed to comedy of one type or another. The success of this film will hinge, in part, on the audience appreciating that its expectations for what should or shouldn't happen in a film are gleefully exploited.

Case and point: Goldthwait says when the film premiered at Sundance, “A lot of people didn't know what the Macguffin was, so when the movie started there were screams. There was this woman who was getting ready to leave at the very beginning, and her friend talked her into staying. About an hour into the movie, the woman was crying, and my daughter elbows me and she goes ‘Look over there,' and I look at the woman crying and my daughter goes ‘Yeah … you cry bitch.'”

This movie asks you to swallow some awful medicine, but like any good medicine, you'll be better off once you've taken it.