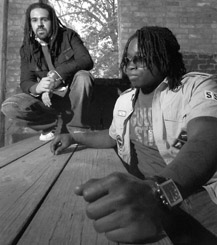 While a statement that grandiose may sound a bit philosophically yawn-inducing, KRS-One has a point: A genre like hip-hop – one that reaches back and references a multitude of other artists with the potential to bring together different musical styles more so than any other genre – really has no beginning or end. It just has tradition.

One of the most important qualities a hip-hop artist can possess is an understanding of tradition, more specifically oral tradition, and the Chicago-based alternative hip-hop duo Tree Thirteen definitely has it.

"In the tradition of storytelling, my background is in spoken word, open mic and rap," explains MC Tree Root. "But coming from hip-hop, coming from a music that samples heavily from other genres, we’re really influenced by lots of other music. That came through hip-hop and came from searching for what the basis of a certain sample was or where the original sample came from.

"I’m constantly writing, every day. I consider myself a storyteller in the tradition of the town crier," continues MC Tree Root. "I tend to liken our type of music to what ‘Seinfeld’ was as a sitcom. It’s nothing and everything at the same time."

Tree Thirteen, made up of MC Tree Root Turner and DJ/producer 007 (Lonnie Bonds), met in a Chicago kindergarten class. From those early roots, the two formed a collaborative – a creative team they likened to a brotherhood. The pair fine-tuned their act by organizing hip-hop events at various Chicago nightclubs as well as performing with Tree Roots and the Traveling Caravan, a nine-piece, live hip-hop band.

For Tree and 007, making the most out of their influences provides endless creative fuel.

"The person that concentrates too much on trying to be original is not the most original person," Tree says. "I think ‘original’ is a title placed on something after someone else has heard it. Nothing is original because everybody’s thought every thought – no word is original; no thought is original – so it’s a lot of reinterpretation. Every form of music that we listen to, classical to death metal, it’s all an extension of some prehistoric human dumping on a damn log."

With influences extending from Miles Davis to Jimi Hendrix and Nine Inch Nails, Rough Grooves Surface showcases the duo’s near flawless dynamic with each other and their ability to mix digital loops and samples with live instrumentation, stylistically fusing their eclectic musical tastes without breaking the cohesiveness of the album.

007 says: "Of all music genres, I identify with hip-hop the most. But that doesn’t limit what I listen to. I’m a big fan of industrial and alternative, especially a lot of the stuff coming out of Chicago, like Nine Inch Nails, Smashing Pumpkins, Filter and all those groups." 007 concludes with a smile, "I love turning that up loud and rocking out to it.