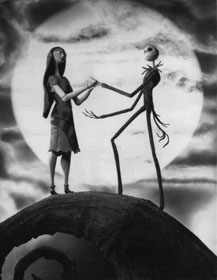 When it was initially released in 1993, Tim Burton's Nightmare Before Christmas racked up points by being both a critical darling and audience favorite. Using a combination of unique animation and imaginative songs, the film has gained and maintained a large following over the course of the last 13 years.

Starting Oct. 19, L.A.'s legendary El Capitan Theatre will honor the Nightmare legacy by celebrating the debut of the film in Disney Digital 3-D. After it premieres at the theater on Oct. 19 – a night which will also be filled with special tricks and treats, including a filmmaker's panel – the film will be screened seven times a day through Oct. 31, including a daily late-night showing at 11:30 p.m. There will also be an exhibit of film sets, props and original puppet characters (on loan from Disney's Animation Research Library) on display at the Theatre through the end of October. From Nov. 1 through Jan. 4, Nightmare will be screened two times a day at the El Capitan.

The film revolves around the goings-on of Jack Skellington, mayor of Halloween Town, who one day stumbles upon Christmas Town during his travels. At first Jack doesn't quite get the concept of the holiday but, after awhile, he decides that he's so taken with the idea of Christmas that he tries to get the resident ghouls and goblins of Halloween Town to celebrate Christmas instead of Halloween.

The El Capitan Theatre is located at 6838 Hollywood Blvd., in Hollywood. For show times and tickets, visit disney.go.com/disneypictures/el_capitan.
Article posted on 10/17/2006
This article has been viewed 2748 times.