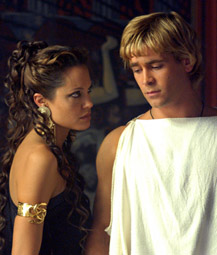 "At first, I thought [playing Colin Farrell’s mother at 29] was as ridiculous as everybody else did," says Angelina Jolie about her latest role as Olympias, Alexander the Great’s mother in director Oliver Stone’s sword-and-sandal epic Alexander. "I think, [only after] meeting with Colin and Oliver, and really talking about it – I [then] identified with her."

When asked why she thought Stone chose her to play an older, snake-loving harridan, Jolie is matter-of-fact in describing the controversial director’s selection process.

"Oliver cast people who he felt [best] represented the characters. I think he felt that I understood Olympias," Jolie explains. "He didn’t get stuck on the [chronologies]. I mean, you meet her when [Alexander’s] 6. When Colin and I are seen together, he’s playing 19 and I’m playing 35. There maybe wasn’t a perfect age for her because she had to be [consistently aged] across the board," Jolie points out.

According to the 29-year-old Oscar-winning actress, she had to adjust her natural feelings and venture into deeper emotional waters for her role in Alexander.

"I just focused on the things that made me feel older … I thought about death and loss," Jolie reveals.

In the film, Olympias deifies snakes by worshipping their supposed supernatural powers and, although the actress has professed an affinity for reptiles in the past, it doesn’t mean she always felt relaxed around them during the filming of Alexander.

"I wasn’t – thank God – afraid of [the] snakes but I wasn’t as comfortable as I had to become. … I did have a little snake once, but he was tiny," she confesses.

Alexander takes place in a harsh period in history – 300 years before Christ – when warrior-kings called the shots and often embarked on conquests and sieges to expand their kingdoms. Jolie shares her thoughts on those times and how the storyline of Alexander, although conceived over a decage ago, speaks volumes about today’s world.

"Oliver had this concept [for the movie] 13 years ago and it was, obviously, a story from [332 B.C.] If it brings up questions, then that’s interesting," she states.

"Personally, the most compelling thing for me was when I saw that there was a time when the person who said, ‘Let’s go to war!’ happened to be front and center in that war. And how different it would be if that were the case today. Depending on where your political slant is, you could try to turn this into anything [from a motivational standpoint].

"The important thing is that Oliver didn’t," she stresses. "He made a film that is very open-minded with letting everything be out there – good and bad. All different sides of everything – sex being a certain way, love being very present, war, the good and bad sides of brotherhood – everything. "The really important thing is that he really struck a balance there, by not trying to impose his opinion. I think that should be commended."

In addition to playing a conqueror’s mom on the big screen, Jolie is also a mother in real life. Despite being a frequent flyer on the front pages of the gossip tabloids, the actress admits that her adopted son Maddox has had a dramatic effect on her life and work.

"It has just made me a more playful person. I’m much more peaceful, because as long as he’s healthy, I don’t worry about anything," says Jolie. The actress sounds as if she’s outgrown her tattooed, dagger-throwing, wild-child image and has moved on to greener pastures. "Nothing else can shake me. I don’t stress about things that don’t matter."