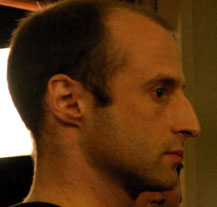 Drawing on the events of the past few years in the United States, Death of a President offers a scenario of the assassination of President Bush and the ramifications that ensue in the current climate of fear and the “war on terrorism.”

British filmmaker Gabriel Range uses what he calls the “retrospective documentary” to present purely hypothetical events in a future light in order to make his audiences ponder the possibility that these future events (the assassination in this case) actually take place. The War on Terrorism, the encroachment on civil liberties, and the culture of fear are themes of Death of a President – and the documentary couldn't be any timelier.

“The film is an extreme interpretation of the events of the past few years,” says Range, whose previous documentary, The Day Britain Stopped , explored hypothetical disasters in the British transportation system in the future.

“Retrospective documentaries are inevitably made in the aftermath of a major world event and they follow a very particular style. I think it's a good way of using the future to look at the present. I think you engage with the material in a different way because if you watch a film that is told in the vocabulary of a documentary, you have certain preconceptions; you absorb the material in a different way.”

Range adds, “You process it in a different way and you absorb it as narrative fiction, as just that. This film here is meant to be and feel as real and authentic as possible.”

Jumping between mystery, thriller territory and documentary-style filmmaking, Range wanted to tie many threads together in his film.

“What I hope the film offers is a sort of meditation on the issues that have arisen over the past five years. I see the film, part political thriller and part murder mystery, as an exploration of the climate of fear that we're in. It's not a hypothesis; I think it's a lens through which to view the events of the past years,” he says.

Combining archival footage and actual footage from filming, Death of a President is a rather plausible exploration of the worst case scenario that can happen in a country – the assassination of its president and the resulting chaos and outrage. For realism, Range decided on portraying Bush as a sympathetic person so that his “assassination” in the documentary would appear terrible.

“It was important to see Bush as a sympathetic, humane person. Otherwise, his assassination wouldn't have looked horrific,” says Range, who admits to watching hundreds of hours of archive footage prior to filming. “Finding the right archive sequence is like searching for a needle in a haystack in the sense that there's always something not quite right – Bush wearing the wrong-colored suit or the wrong-colored tie. That was a very laborious process.”

Because of the controversial nature of the film and the sheer malign of its central idea – the assassination – Range steered away from funding from the U.S. “Although the film is set in America, I hope it appeals to audiences worldwide because the themes it touches on are universal. I always knew that making this film would in some way be provocative. There might be some people who thought that the idea of this film was offensive. The provocation is justified.”

After several years of the war in Iraq, the attempts to neutralize terrorism and contain it, and using fear as a political and cultural weapon, Range informs that he wants his film to reflect the long-term ramifications of the Bush administration.

“What the film does is reflect a growing sense of anger and deception. I've spoken to plenty of veterans who describe their experience going to Iraq absolutely believing that Iraq was connected in some way to 9/11. There's a sense that it's hard to believe that right now. People are asking questions about why they're in Iraq and about the motivations for the war. The movie is another way of exploring that,” says Range, concluding, “People have actually told me, ‘Bush killed my son!'”

Death of a President releases in select theaters Oct. 27.