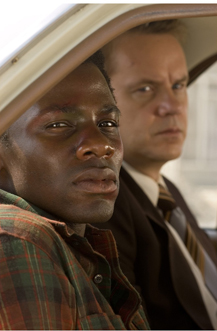 As a film based on South Africa, Catch a Fire mines a familiar terrain. The apartheid struggle of the late 1980s colors the plight of the central character Patrick Chamusso (Derek Luke) and his evolution from an apolitical mine worker to a fervent activist of the liberation movement. Based on the real life story of an ANC (African National Congress) political prisoner, the film attempts to convey the strident atmosphere of apartheid as well as Nelson Mandela's post-apartheid call for “forgiveness.”

Chamusso never thinks about politics. He mainly thinks about his job as a foreman at the local oil refinery. As a black South African, it is one of the few laborious jobs that is available to him, and as a husband and father, it is a job that represents his family's marginal survival.

On the other side of apartheid resides Nic Vos (Tim Robbins), the apathetic head of the police security branch and its anti-terrorists efforts. The terrorists whom his team targets are, ironically, those of the ANC fighting to dissolve minority white rule.

It's not so difficult to become enraged by the plot, for it illustrates the real life system that audaciously oppressed a majority Black population. As Vos and his team attempt to trace down Chamusso and his gang via brutal tactics on friends, family, women and children, the film effortlessly conjures an angry tension.

Nevertheless, Catch a Fire doesn't manage to capture a greater depth to its characters and thereby, falls short in endowing a more dynamic perspective on the apartheid story. The series of events are much too expected and much too comfortable.

Even though Luke undoubtedly delivers a noteworthy performance, the context of his character only allows him to skim the surface. The history and impact of apartheid are far too deep for this storyline to contain.

The culmination of the film certainly proves that there was a clear thematic agenda from the outset. Intertwining footage of Nelson Mandela, the message of forgiveness washes over the film like an awkward panacea to Chamusso's own personal reconciliation. But it's certainly reflective of the country's political stance after the end of apartheid.

Truth and reconciliation were two key words that propelled the ANC's transition and signified Mandela's weapon for a non-confrontational transfer of power. The message is a little unsatisfying after witnessing such cruel acts on the part of Vos upon Chamusso and his comrades; yet, as the film depicts, Chamusso is a real person, who was a freedom fighter, and who really did forgive.