Silversun Pickups: Off the Hoople 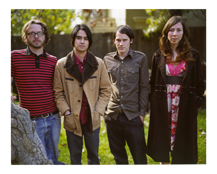 Silversun Pickups are the hoople. Going through the lineage of rock's well known hooples, we instantly recognize the 1970s glam rock band Mott the Hoople, the group named after a book which detailed the life of an eccentric living in a circus freak show.

Flash forward to today and instead of books; we now look at blogs, and in this case, the blog of SSPU. Vocalist/guitarist Brian Aubert has used the word to describe shows by saying they were “off the hoople;” but ask him what it means and he is as unsure as anyone. “I don't know what a hoople is. I'm bringing something new to the table,” he says.

Aubert, along with bassist Nikki Monninger, drummer Christopher Guanlao and keyboardist Joe Lester are bringing the hoople across the country in support of their full-length album Carnavas , which was released in July. The band has even trekked to Norman, Okla., a city which at first glance doesn't seem like a town that would have many indie rock fans.

Pretty good for a band named after a liquor store (Silversun Liquor, at the corner of Sunset and Silverlake) and formed primarily to just play music together in 2000. But it wasn't until 2003 that it felt like a cohesive unit – most notably during a performance at the Sunset Junction festival. It helped that everyone in the band has been friends who have played together or in mutual friends' bands.

It was after one of their early shows in L.A. that the band decided to hit the studio. After listening to a bootleg of one of their live show recordings, Aubert became dissatisfied.

“It was the catalyst for pushing us to the place where we already knew we had to go. We were like OK, if there's people that want to hear us at home, we better do something about that.”

The band released the Pikul EP in 2005. Bouncing of the somber sounds of Pikul , SSPU were able to create something different with Carnavas , Aubert says. And what a sound – an immense wall that Phil Spector would be envious of. It's an album filled with a heavy dose of distorted rock lathered by a lush drone of dream pop.

“The record wanted to shoot out like a bullet,” Aubert says. “We wanted you to play it like you're already in the record, right when it starts. It's definitely our rock record.”

As with Carnavas' release, there is an added slice of hype to the SSPU pie. Even though it's been deemed as one of the top ten bands to watch out for in 2006 by Rolling Stone and compared to Smashing Pumpkins and My Bloody Valentine (the band is a big fan), it still doesn't phase the members of SSPU.

“We never feel any pressure because what can you do?” Aubert remarks. “You're going to play and release music regardless of the hype or not. All of the press stuff – that was no way near our radar. We're pretty stunned that anybody would pay attention to a little band like us.”

For Aubert and the band it's still about what made them start up in the first place. “We love playing, recording is fun in a different way, just learning and trying stuff, being experimental. But to me, it's definitely nowhere near as fun as playing live.”

And perform they shall. After finishing a headlining tour, the foursome will hit the road, opening for Wolfmother. Fans shouldn't expect anymore three-year album hiatuses though. According to Aubert, the band looks to not take a long break in hopes of trying to get a new record out by the end of the next year.

“You're not going to have to wait three years ever again or we can break-up, and that's the end of that.”

Don't worry; he's just being off the hoople.