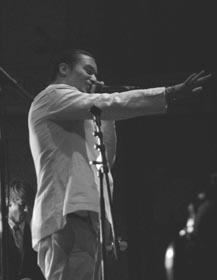 Goldenvoice and L.A. Weekly successfully drew nearly 20,000 to the dingy streets of downtown L.A. for this inaugural fest. It was hard to tell there were so many people in attendance though, as the four stages were well-spread out, and there really was something for everyone going on all at the same time.

Besides the requisite vendor, food and beverage booths, there was a small area for local artists to showcase a piece or two. But everyone was really there for the music.

L.A.'s golden son, Mr. Beck Hanson, was accompanied by puppeteers manipulating marionettes that were fashioned to look like each of his band members and mimicked each musician's moves on stage. Beck blended crowd favorites like “Loser” and “Where It's At” with new tracks from his latest CD, The Information to deliver a thoroughly enjoyable show. Straight from the desert, Queens of the Stone Age howled under the night's full moon.

After pounding through “No One Knows,” vocalist-guitarist Josh Homme made his usual blasé comment about getting the radio hit “out of the way” so they could play other songs like the searing “Burn the Witch.” My main reason for attending the festival was curiosity to see Mike Patton's new project, Peeping Tom. After an introduction by Danny DeVito of all people, the band had the crowd moving to “Mojo” and “Kill the DJ.” Queen BellRay, Lisa Kekaula provided guest vocals for an energized Basement Jaxx set. Redd Kross, the Like and Everybody Else infused some local flavor into the festival.