Two's Company: Pedro Almodóvar and his Muse, Penélope Cruz, Explore the Women of Spain in Volver 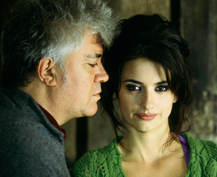 “My movies sometimes change from one line to the next line; from a comedy to a tragedy.” That's how heralded Spanish director Pedro Almodóvar explains his MO. Mixing genres seems a simple enough recipe for success, yet to cook it as deftly as Almodóvar requires a genius of vision that you're unlikely to find in a weekend screenwriting seminar.

For the last quarter century Almodóvar has continued his program of genre splicing every few years (see lauded films Talk to Her and All About My Mother ), addressing everything from the grotesque to the silly of his native Spain. I mention the genre mashing because it makes explaining his films a sticky task, and his new Penélope Cruz-fronted release Volver ( Coming Back ) is no exception.

Ostensibly, it is a story about the relationships of a family of women; but there is also a ghost story, a murder mystery, a light comedy and a look at Spanish society's attitude towards death. It may seem bizarre or inane when considered apart from the film, but after seeing it, the interweaving of disparate elements is natural enough to have each part seem essential to the whole. Almodóvar points out that he is just trying to mimic aspects of reality in the neo-realist tradition (Felini et al) saying, “During the day, you pass by different genres a lot.”

Still, it would be too easy to think that Volver resulted from some magic, inter-genre, sense perception related to everyday experience. As un-magical as it might seem, a good deal of the film's flow is a product of rehearsals, an old theater standby, which were vital to Almodóvar.

“To maintain this balance [you need] to see what happens, and to see how it sounds,” he says. By putting in the time to examine each shift in tone as it was performed, Almodóvar could chip away the bits of his script that veered too far in one direction or another.

Of course, it also helped that Cruz is a good friend of Almodóvar's, or as he puts it, “It's an advantage that she has complete confidence in me. That gives me a lot of responsibility because anything I ask her to do, she will do it.”

Cruz and Almodóvar worked closely together on developing her role as the protagonist Raimunda, modeling the character scrupulously on actresses like Sophia Loren and the women that Almodóvar remembered from his childhood in the south of Spain. Cruz was given advice about what movies to look to for inspiration.

She remarks, “He [Almodóvar] wanted me to watch movies from Italian neorealism – and all of those women were playing strong mothers.” Almodóvar even had Cruz wear a butt pad to match his vision for the character because, according to the director, “In the iconography of the mothers I had, these women are [all] more curvy,” in clear contrast to the waif-waisted Cruz.

In order to deal with all the changes in the story's direction, Cruz had to maintain a strict focus. “The secret for [acting in this film] was for us to forget about all the changes of tone and take care of the actions one thing at a time,” she says.

All of the attention to detail seems to be paying off, and there has been quite a lot of chatter about Cruz perhaps garnering an Oscar nomination for her work in the film. Naturally, Cruz is excited by the prospect, but attempting not to fixate on it saying, “[I was] trying not to think about anything like that, but when people are telling you 20 times a day, it's very hard not to think about it.”

But Oscar buzz aside, Volver is a tale that deals in weighty issues with a delicate touch. The big and prestigious names attached to it are not nearly as impressive as the film itself, with its combination of never-think-to-put-together elements.

Almodóvar luckily can whittle down the theme of the film like it were some pesky extra line of dialogue explaining, “The message of the film is to talk about these women and this very natural relationship with death.”

Interviews
Maleficent doubts her fitness as a mother. So did Angelina Jolie
682 views