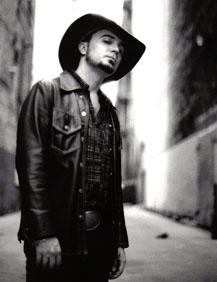 Joyner is a terrific songwriter, but it is his booming voice that has earned him the respect of southerners – and music fans – living in the west. Joyner's crowds can be a who's who of California country, and at any show you might find yourself rubbing elbows with the likes of Shooter Jennings, Dwight Yoakam or Lucinda Williams. (In fact, Williams' backing band is practically all over his debut CD Skies of Blue, Fields of Green )

Releasing his first CD on Papago Records in 2005 helped him gain a new collection of fans, but it was a trip to his home state and Memphis earlier this summer that paved the way for his biggest success. While in Tennessee, Joyner was spotted and invited to take part playing a benefit concert at Robert Redford's ranch in Colorado. Redford was immediately smitten, and a follow up trip to Tennessee will occur in early November.

“We sold out of all the 275 CDs we brought to Memphis,” Joyner says in his unmistakable Mississippi drawl. “And then we got so rip-roaring wasted that our guitar player Dan Wistrom slept on the roof of our van.”

Joyner and Co. spread themselves around the local Los Angeles clubs and are monthly mainstays at the Mint on Pico. Joyner spent months playing the Malibu Inn and Hotel Café, and is an integral part of the legendary underground L.A. outlaw country gathering “Sweethearts of the Rodeo” who recently took a hiatus after six years of turning Molly Malone's into a rip-roaring honky-tonk.

Frequent comparisons to the Allmans have brought Joyner to the attention of southern transplants living in L..A. He has been the house performer at Falcon on Sunset for its monthly “Arkansas Night.” It could be said that the gathering resembles Woody Guthrie singing for the dust bowl refugees in the 1930s.

Should Joyner's music catapult him beyond the L.A. and Tennessee audiences that have already embraced his powerful music, life could become very surreal indeed.

Joyner's Skies of Blue, Fields of Green is available at www.papagorecords.com. Make sure you check out the stoney title track, the heartbreaking “Think of Me” and the dawn patrol celebration that is “Sunny Southern California.”

Bobby Joyner and the Sundowners will play Nov. 10 at The Mint, in West Los Angeles. For more information, visit www.bobbyjoyner.com.