Detox: Is a Wastem Some Experts Says 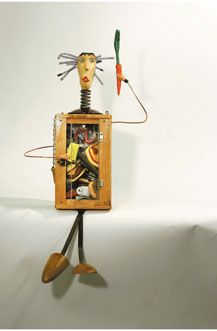 From magazine covers to pop-up ads to spa brochures, detoxification programs are all the rage. With a few pills, a mix of lemon, cayenne pepper and maple syrup, or a week of fasting and enemas, programs promise to wash toxins away.

Those who believe have no doubt that the fasts, the cleansing pills and the spa programs work. They feel lighter, more energized, more aware, and they don't need mainstream medicine's stamp of approval.

But as the practice booms, with $27 million spent last year alone in purging products, both traditional and alternative medical experts are raising red flags, saying people can become sick from trying to come clean.

“In my opinion, it's difficult to say what value these liver and colon cleansings have,” says Scott Greenberg, a family medicine doctor at the Magaziner Center for Wellness & Anti-Aging Medicine in Cherry Hill, N.J. As part of his practice, Greenberg is overseeing a federally funded trial on chelation therapy, in which heavy metals are believed to be removed from the body using an amino acid.

“I've had plenty of patients who have done it and say they feel better,” he says. “But if they've gone from eating junk food or processed food to a diet with more vegetables and juices, whether they're using coffee enemas or teas, there's just not as much junk going through their system.”

The word “Detox” can mean something as simple as a drink of water after a massage, something as complex as the weeklong $4,623 “Detox and Colon Cleanse” program at The Raj spa in Iowa (where the coffee enemas are included, but the “enhanced oils from India” at a cost of $350 a day are not).

The Food and Drug Administration does not require herbs and vitamins to undergo the rigorous tests required of pharmaceuticals. Many traditional doctors are skeptical of the detox claims, but recognize that many of today's medicines are derived from natural products – they're just waiting for proof.

“The best thing that could happen is if these companies making products would allow them to be tested,” says Keith Lindor, a gastroenterologist who specializes in liver problems at the Mayo Clinic College of Medicine.

“If they're as good as they claim, we'd want our patients to be receiving them.”

Other doctors dismiss detox entirely, saying the only things being purged are people's wallets.

“It's very good for people who have a lot of excess money that they need to waste things on,” says David Kaplan, a gastroenterology professor at the University of Pennsylvania School of Medicine.

Doing a detox program is not just a fad, says Alison Gaines, a nutrition consultant in Lenox, Mass., who leads groups through two, three and seven-day cleansing programs.

She pointed to several references in the Bible, from Moses to David to Jesus, fasting for days at a time to protest, to cleanse, to focus.

In the 1920s, John Harvey Kellogg suggested daily enemas to help clear out body toxins at his health sanitarium in Battle Creek, Mich.

The practice faded and was revived again in the '60s, as forms of protest and a path to spiritual enlightenment. Today, the emphasis is all about balance and toxins.

The thing is, doctors say, the body does a good job of cleansing itself, all on its own.

“The inner lining of the GI tract sheds itself every three days,” says Kaplan, of Penn. The enemas just move along what's naturally there, he says.

The same with the liver, says Lindor. The organ metabolizes substances such as fats and produces bile, which helps digestion. What the body cannot digest is processed through the kidneys.

“When people have kidney stones, we ask them to drink more water or juices that may acidify the stones and help them to move through,” he says. “But we don't have any evidence that that process works with the liver.”

Long-term programs can result in serious problems, from anemia to malnutrition, both mainstream and homeopathic experts say. They generally agree that those on medication or who have serious health problems should check with their physician before doing any kind of cleansing. Without supervision, three days is about the maximum time to go without regular food.

Detox advocates say that the process should be gentle; that it's about giving the organs a break from heavy foods and time to clear out the body.

Gaines, doesn't encourage fasting. “Fasting connotes something that I don't believe is healthy for everybody,” she says. “So when we mention a cleanse or detox or purification, we're talking about finding something that's a little more balancing, and not extreme.”