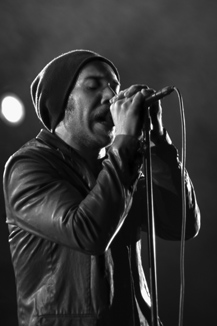 The vocals of Placebo and She Wants Revenge couldn't be more different. Brian Molko's signature androgynous whine has popularized Placebo for more than a decade, while Justin Warfield's deep and threatening voice has made She Wants Revenge one of the stand-out bands of 2006. Though these singers have undeniably dissimilar styles, the two bands complemented each other perfectly at the nearly sold-out Greek Theatre.

Placebo kick-started the night with “Infra-Red,” an infectious new single off Meds, the band's fifth studio album. The song was accented with a megaphone held by the tiny, but adorable Molko, who kept his eyes closed for the majority of the show. The only exception: an occasional upward emo glance, flashing his flirtatious blue eyes and painted lashes.

Guitarist Stefan Olsdal embodied more of the rock star persona than the effeminate Molko ever has. With his mild mohawk, bare chest, Axl Rose-style hip swiveling and encouragement of audience participation, Olsdal hammed it up at every opportunity.

The set was thick with new songs including title track “Meds” and the upbeat “Because I Want You.” Old favorites like “Every You Every Me,” “Special K” and “Taste in Men” made male and female fans equally giddy.

Though some classics were missing from the set (“Pure Morning,” “Teenage Angst”), the addition of an intense and dramatic cover song was a definite highlight. In “Running Up That Hill,” a deep and vibrating bass-line and minimal keyboard built emotionally to an ethereal crescendo.

Placebo definitely won over the many She Wants Revenge fanatics in attendance that night.

The bleak and morbid sound of the headliners was a distinct change of pace. She Wants Revenge opened with “Red Flags and Long Lights,” a song that doesn't have a clear beginning, middle or end, just like the band's set.

About six songs in, a string quartet joined the band onstage and added an elegant, yet ominous quality to the next few songs. Most notably on “Us,” the sad strings and desperate melody made for a gripping performance.

For a band known for its monotone vocals, this set was anything but monotonous. The very reserved song “Disconnect,” a keyboard interlude, sat calmly amidst upbeat songs like “Out of Control” and the current radio hit “These Things.”

Preceeding the extremely catchy “I Don't Want to Fall in Love,” multi-instrumentalist Adam 12 asked the energetic crowd of thousands, “Anybody wanna dance?” This immediately instigated a scenester shuffle throughout the theater.

If passed on the street, singer Justin Warfield might be mistaken for a bum: ripped T-shirt, scruffy facial hair and a large beanie concealing a mop of curly hair. But somehow, when he's on stage under flashing red and purple lights, his dark and brooding demeanor is surprisingly sexy.

Warfield and his band captivated the audience up until the very last note of its set, which happened to be an a cappella chant of “Tear You Apart's” sinister chorus.
Article posted on 10/30/2006
This article has been viewed 1563 times.