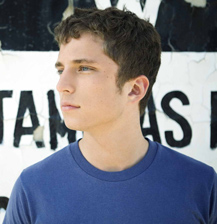 For musicians, performing under a stage name is nothing new. The old blues masters like Howlin' Wolf did it (Chester Burnett) and so did a member of the Beatles, Ringo Starr (Richard Starkey). When Reginald Dwight wanted a zippier name to perform under he took parts of his handle from fellow musicians Long John Baldry and Elton Dean and became Elton John. On the current popular music scene just about every rap artist uses an alias, usually in an effort to sound cooler, richer or meaner than the next guy.

For Ronnie Guglielmone a change of name was merely about simplicity – he became Ronnie Day after picking the moniker from among those suggested by fans through his MySpace page. Day laughs as he recalls sifting through the stack of submissions.

“Somebody wanted me to be Ronnie Danger like I was some sort of super-hero.”

Ronnie adopted the surname Day because he liked the optimism associated with the word day – a dawning; a beginning. If he had of chosen Danger it would have, no doubt, given people the wrong idea but to many Day provides the same type of inspiration that a superhero would.

After passing a proficiency exam at age 16, Day left high school and began earning a meager living by giving guitar lessons. Soon there was enough in his bank account to finance a tour – nothing fancy – but the singer's can-do attitude quickly caused his fan base to swell as he performed in back yards and crashed on couches all over the country.

Day says he doesn't sweat the details, he just thinks globally and lets things happen. That philosophy is obvious as he discusses his latest release for the Militia Group, The Album.

“I listen to a lot of Jackson Browne, Bob Dylan and Bruce Springsteen,” Day says. “I feel that a lot of music today, a lot of albums don't seem to have a common thread. Even the songs; I listen to songs and I can't follow them from beginning to end. I feel like The Album actually flows from track one through track 16.

“Each song has a purpose. There's a hint for the listener that there's a story to be followed. I really don't want the story to be hitting people over the head like a brick, but I want people to be aware of the fact that it's there if they want to look for it.”

A good deal of the story that Day tells on The Album is inspired by the end of a relationship. Day lives in the Bay area but headed to L.A. to record the songs that he had written while on tour, most of which were love songs for his girlfriend of three years. During a break in recording Day went home to find that his girl had left him.

Day must've had a hunch that something was wrong as he more or less predicted the break-up with one of The Album's stand-out tracks, “November Storms.”

The couple has not reconciled, but Day indicates they are at least on speaking terms. A picture of the girl with her back symbolically turned to the camera is posted on Day's MySpace page, something that for most people in Day's situation would just cause more pain.

“It's actually not a bad reminder,” says Day. “It's there to add validity to the story. I'm not making this up for the fun of it.”

Ronnie Day's The Album is currently available. Ronnie Day will perform on Nov. 9 at the Knitting Factory, in Hollywood. For more information, visit www.ronniedaymusic.com