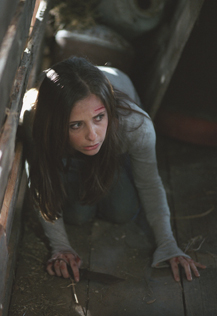 Tell us about your character, Joanna, in The Return .

When we first meet her, she's fairly lost; living her life, but not experiencing it. She had a rough childhood, ran away, took a job that she wasn't necessarily passionate about but allowed her to travel so that she was never in one place long enough to worry about belonging. But things start happening, and she starts to deteriorate very quickly and goes on a frightening and passionate journey.

What was it that initially attracted you to this film?

I think we [myself and director Asif Kapadia] were both fascinated with its underlying Buddhist themes, that life is cyclical; you come and live your life and then you come back and fix the things from the past.

The Return is about how you need to finish your life before you can truly transcend to what is essentially the next life – and what happens if you don't finish what you were meant to do on Earth.

What things did you like the most about playing Joanna?

One of the things that I particularly liked about Joanna was that she speaks so well for everybody – young girls, middle-aged women – who understands what it's like to not belong. She feels that she never did belong and then finds out that these feelings are true. She takes action to find her identity and find where her place is.

The Return is Kapadia's first American film. Did you see a difference between working on this film and other projects you've been involved with in the past?

Asif found it all so magical; that rubbed off on everybody else. He brought European flair to this American story. Another thing I like about him is that he's always right in the middle of it.

Some directors will sit in their little tent in video village and yell out notes from there. But Asif is the one crouching in a corner underneath a black blanket in the heat, so that, with nobody seeing him, he can be close enough to see an actor's face – what they're saying and what they're not saying. I think it makes for a better performance.

The Return releases in theaters Nov. 10.