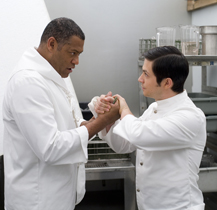 Written and directed by Emilio Estevez, Bobby – about the various events taking place, and people passing through, L.A.'s once-esteemed Ambassador Hotel on the day that Robert Kennedy was assassinated in 1968 – is a film about the past which manages to resonate in today's political climate.

A laundry list of celebrity names tops the film's marquee, including Anthony Hopkins, William H. Macy, Christian Slater, Demi Moore, Sharon Stone, Ashton Kutcher, Lindsay Lohan and Elijah Wood. This big ensemble cast is meant in some ways to be an onscreen metaphor for the number of people who Kennedy affected or inspired throughout his abruptly ended career.

“You can only imagine with a leader like Bobby Kennedy how much further along we might be today. It seems like race relations [were progressing] when Martin Luther [King], Malcolm X, JFK and Bobby Kennedy were assassinated, and that progress was stalled in a lot of directions. Maybe at that time, we just weren't ready for it,” says Slater, who plays the Ambassador Hotel's food and beverage manager.

“Bobby Kennedy was such a powerful man and such an eloquent speaker that through his words, he was able to affect many people around him. Even a character like mine was able to find some humanity in him eventually. That's really what the movie is about – it's about human beings and where we're at.”

Bobby invokes memories of the trust and faith that the American people had in the government; it acts as a reminder of how much we have departed from the idealist values that existed during Bobby Kennedy's time.

“As a result of doing this movie and seeing this movie, we're politically re-ignited. We've been feeling politically dormant for the past six years. Hearing a speaker like Bobby Kennedy helped shape my views on the sort of candidate we'd like to have for the future, a leader with that integrity and good traits,” says Slater.

“I've met Hillary Clinton and [Illinois Senator Barack] Obama. It's been great but when I look at posters and pictures of Bobby Kennedy, there was a genuine quality in him and a real love for people and peace. I think that speech [at the Ambassador hotel, right before he is assassinated] at the end of the movie should be required learning. When I heard it, I was extraordinarily moved. Just to be reminded that such a man existed and who did speak this way is vitally important.”

Other actors who play secondary characters quipped on how educating and informative the film is.

“It's a combination of both [entertainment and education],” says Freddy Rodriguez, who plays one of the hotel's bus boys. “We hope the young generation is inspired but educated as well. Watching the movie definitely educated me about what it's like to have a leader like Bobby Kennedy and people of the young generation standing behind him. For my generation, I can't really say there has been anybody like that. There have been glimpses of that – in Bill Clinton, I think, a bit – but not to the extent of Bobby and how people were inspired by him.”

Joshua Jackson, who plays an especially conscientious campaign coordinator for Kennedy in the film, talks about his enthusiasm for the project.

“The script was excellent! It spoke to a time of idealism and passion. The first time I read this was pre-9/11, so before the Western world was being turned on itself. It spoke to me as a person who feels engaged in politics,” says Jackson, who concludes by voicing his opinions on the current state of U.S. politics. “Our president now is giving himself the powers of a monarch from the Middle Ages – that's how freaking bad it is. We need to reclaim those things and fix the situation!”