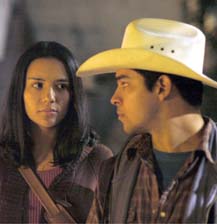 Inspired by Eric Schlosser's best-selling book of the same name, Richard Linklater's film follows Don (Greg Kinnear), a hot-shot marketing executive for the fictional Mickey's burger chain who receives the news that the beef used to make patties for the company's top selling Big One sandwich is contaminated. The trail of taint starts at the main meat processing plant in Cody, Colo. where Don learns that there's more nuances to his business than he had ever imagined.

Keeping in accord with Schlosser's tome, Linklater dives into other aspects of the fast food industry with a couple of tangential subplots. One of these is the story of the illegal Mexican immigrants Sylvia and Raul (Catalina Sandino Moreno and Wilmer Valderrama), a married couple who flee their homeland with the help of Benny (Luis Guzman) a hardened coyote (people smuggler).

Once the couple makes it safely to the States, they seek gainful, under the table, employment wherever they can. Raul secures a gig at the meat plant in Cody and Sylvia finds work as a domestic. Soon, the two immigrants begin to make plans to get their piece of the American dream, which seems to be just within reach – or is it?

“We tried to focus a lot more on the universal theme and feel of the immigrant – how positive they are about coming to America and creating the original American dream,” says native Venezuelan Valderrama of the film's approach to portraying the immigrant experience.

Valderrama arrived in the U.S. with his family as a child but Moreno arrived under totally different circumstances. “I know that my experience is one in a million of cases,” she begins.

“HBO helped me so much with my visa but I know a lot of people don't have HBO to help them,” she says with a bittersweet smile and points out, “I realize how frustrating the whole process can be. I know that I'm lucky.”

Since her groundbreaking turn in Maria Full of Grace , Moreno has gone from a virtual nobody to the next potential Latina “It girl,” but according to the Colombian actress, sometimes you've got to leave your people behind to chase your dreams.

“My family [doesn't] want to come here. My mother is a doctor and she teaches. My brother loves [Colombia] and wants to do something for the country – he's a real Che Guevara [type],” she notes.

Moreno has no illusions about pursuing her craft and does not take her job lightly in the least– even when she takes on subject matter foreign to her everyday experience. “After I saw Maria Full of Grace , I saw people's reactions to the film and they didn't know anything about drugs,” she states. “They just couldn't believe it's something that's happening in Colombia every single day. I just felt that part of my job in movies [is to deliver] a message.”

One might wonder if the Oscar nomination for her turn in Maria helped get better scripts forwarded in her direction. “The Oscar didn't change my life at all, “ Moreno says point blank. “After the Oscars I thought, ‘Oh, I'm going to get these great projects.' But no, I had to wait a year to get [ Fast Food Nation ].”

Conversely, Valderrama rose to prominence by portraying the exchange student Fez on the popular sitcom “That 70s Show,” but it's not lost on the actor that things were not always groovy. He reflects, “Seeing my dad's struggles – we ate dinner every other night and it wasn't a sad thing, it was reality – we have a very hardcore understanding [of] what to be grateful for.”

So what's Valderrama's take on fast food? “You come to America, you eat a burger – that's what you do, “ he laughs. “I play a lot of sports and I began to understand very quickly [that] it was making me feel really lazy. So, I stopped for those reasons … I did the movie and realized that our body was digesting things that were not meant to be digested – things that have often been digested already. That's why I felt like shit when I was eating it.”

Now that Fast Food is in the can, both actors are already looking toward the future.

Moreno comments, “I did a movie with Ethan Hawke directing. It was a nice, cute love story but it was real. I don't like love stories because you fall in love, you break-up and then you're in love again. But I thought working with Ethan was good and my mother was [played by] Sonia Braga which made everything more fun.”

Valderrama, however, seems to be shooting along a more mainstream trajectory with a remake of the pop-culture cop show “CHiPs.”

“We're in pre-production right now and the script is super solid, it's fantastic,” the actor exclaims. “It's the answer to every attempt that was done before. [Filming] will be sometime next year, but it's definitely happening.”