Parker Posey: The Indie Queen Goes Home for Purim in Christopher Guest's For Your Consideration 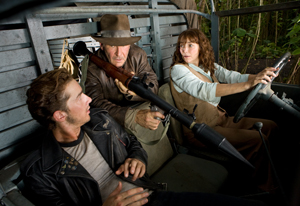 Parker Posey doesn't seem to be chasing attention at the press conference for her new film For Your Consideration . She is dressed comfortably and is working patiently, if a bit distractedly, on a square needlepoint tapestry that looks like a cross between a Vermeer portrait and the Swiss Miss girl.

But nonetheless, the attention is definitely focused on her. She can barely sit down before an entertainment reporter gushes a heartfelt “Congratulations!” in her direction, flagrantly ignoring the two co-stars to her left.

Posey, intrinsically nonchalant – or perhaps congenitally distracted – can only ask why, and after receiving an equally florid “For being you” from the bubbly aw-shucks reporter, looks down at her tapestry, threads a needle through the little child's portrait and throws out in her airy way, “I thought you were gonna congratulate me on the needlepoint I just created.”

It points to a simple fact: Parker Posey is not your typical Hollywood female lead. It's not just that she comes across personally without the conciliatory self-consideration or gift-to-the-world narcissism of your average female lead, but the same casually unconventional attitude is reflected in her work as well.

For a decade-and-a-half, she has been a major figure in independent cinema, gracing the screen for top-flight directors like Richard Linklater, Noah Baumbach and for the fourth time with this film, the original mockumentarian, Christopher Guest.

This latest Guest film again finds Posey as a member of his elite improvisational task force, alongside the likes of Fred Willard, Catherine O'Hara, Michael McKean, Eugene Levy and quite a few others. Although For Your Consideration veers from the straightforward mockumentary style of Best in Show and Waiting for Guffman , it still relies on the actors' considerable on-the-fly skills to tell the story of a small independent film called Home for Purim , and the Oscar-related message board postings that create unrealistic hopes for its struggling, no-name cast.

Although Webb tries to come off as a true artiste , when she hears her name mentioned for a possible nod, her excitement is palpable, disappointing Chubb, or perhaps making him jealous. Posey's performance jabs at the neediness and self-seriousness of actors.

“Since [Chubb] didn't come and give me a hug and a kiss immediately, my character chose to put the entire relationship on fire … We thought that they had been together for awhile, that the relationship was very stable, but after I saw the movie I thought Callie hadn't been in a good relationship in her entire life,” Posey says.

If that sounds like a very involved point about the situation of make-believe comic characters, it is; and it's a product of the character development that each actor has to work through before getting to the set of a Guest film. Since the only scripted scenes in For Your Consideration are from the movie-within-the-movie, each actor had to tap into their character's back-story to be able to improvise convincingly.

Even though she's a veteran of Guest's movies, Posey still finds working the “Christopher Guest way” to be an engaging challenge.

“I don't think this work is easy, it's a little scary and exhilarating. It's like being thrown off a cliff into some water; you don't know what it's going to be like every time. There's a lot of trust involved; that balance of focus and forgetting at the same time,” says the actress, who points to Guest as the reason she and the rest of the cast have become beloved comedy staples over the last decade.

“Chris is so intelligent and kind and smart. I love these movies in that they're not mean at all and the jokes aren't at the expense of someone else.”

But even though the actors put in serious work to develop their characters before arriving on the set, the absurdity of Home for Purim being a kind of Fried Green Tomatoes meets Fiddler on the Roof film led even Posey to crack up the first day of the shoot.

“I'm in this period wardrobe, and I'm bringing my lesbian lover to meet my [dying] mom played by Catherine O'Hara … so there was a lot of sweating,” she says.

The on-set giggles were complicated further by the reaction of the notoriously stolid Guest. “Chris would come in and say ‘Are we gonna shoot this?' and Catherine's like ‘You just got yelled at, you just got in trouble!' and I was like, ‘OK, I'm ready.' I was reading a very serious book at the time, and I would read it in between takes, so I wouldn't start laughing.”

And if the material itself was too silly to get through sometimes, the added challenge of acting along with Fred Willard, who as the “Access Hollywood” style host Chuck Porter sports a dark red Ryan Seacrest-approved faux-hawk, proved an even greater challenge.

“[Fred's] amazing. He walks around with a relationship to a part of himself that he's been honing,” says Posey. “You know, just hold on, just hold on. And that's another sweaty day, a really sweaty day.”

So, eight years after being crowned the queen of independent cinema, Posey is still all about the work. With a role in Superman Returns and a well-received lead role in The Oh in Ohio , she's been able to raise her profile this past year, without sacrificing an ounce of credibility.

With her hilarious turn in For Your Consideration , she can only add to the throngs that revere her like some holy secret. Mouth slightly agape, eyes wandering up, she shares a little secret that's helped her on Guest's movies: “You don't go in trying to be funny. You just hope that once you start talking that something ends up being funny, and it usually is.”

For Your Consideration releases in theaters Nov. 17.