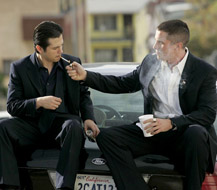 There are those who take the words written on the side of their police cruisers seriously – “To protect and serve.”

And then there are the testosterone junkies, the thugs, the guys who enjoyed “busting heads for the military,” “just following orders” and the adrenaline rush they got from combat.

That's who Christian Bale plays in Harsh Times , a gritty, nervous and somewhat amateurish amble through a couple of days on the rough side of L.A.

Buzzcut and bad-eyed, Bale's Jim Davis only wants to be a cop. He grew up in a world where he and his Latino pals knew more about the police than any other profession. Some of those running mates are now in the force.

And Davis is dying to join them. Harsh times call for harsh men, and Davis is as harsh as they get. He can injure or kill without compunction. Six years in the Army Rangers gave him those skills. But the LAPD is leery of him.

So we follow him and his pal Mike (Freddy Rodriguez) as they cruise the city in Davis' faux cop car, supposedly looking for jobs, but basically looking for trouble. They rob dope dealers. They bully girlfriends and ex-girlfriends.

They're both at a crossroads, close to something resembling success or happiness. Mike has only to straighten up so that lawyer-girlfriend Sylvia (Eva Longoria) will decide he's worth the trouble. But even as carrots are dangled in front of them, Davis' damaged, violent psyche rears up and thwarts them.

He is the hero you root against. He's the very sort of guy you'd hope the police would avoid hiring. But when the Feds ID him as a possible recruit to covert drug war work, the fear that he'll actually be given a badge to go with the guns he is so quick to whip out rises up in the throat.

Writer-director David Ayer self-financed the picture, and at times it plays like a film school exercise. Endless scenes of the two guys riding along, venting and cursing and chugging beers play like acting class exercises, badly written ones at that.

Ayer's destination, a study of a marginal personality and how he might be given power to make life-or-death decisions over civilians in our name by our government, is fascinating. But the slow, haphazard, buddy picture path he takes (think Training Day , only inept) leaves Harsh Times in the ditch.