Eighteen Visions: Forget What You See 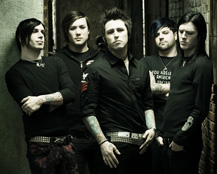 Bands these days can be so predictable sometimes. Wear these jeans, use these hair products, cite these bands as your biggest influences and report promptly to your assigned musical genre for band assembly, right?

While the Orange County natives of Eighteen Visions have a distinctive aural and visual style that some might consider “popular” for all intents and purposes, they'll be damned if they let anybody make any assumptions about them because of it.

Having become somewhat notorious for drastic stylistic changes from one album to the next, there have of course been murmurs surrounding the band's continued distancing from the hardcore roots that spawned it. A lot of trash has been talked, a lot of old-school mentality elitism spewed and of course a lot of drama both in the band's fan community and the members' personal lives as well.

And you know what? That doesn't bother frontman James Hart one bit.

While he was very aware of how the band's shift away from extremism to a more easily palatable hard rock sound on its latest self-titled album would likely be received by older fans, Hart and his band decided to throw caution to the proverbial wind.

“It was definitely more, ‘fuck it, let's just do it,'” he says of his frame of mind when writing the album. “A lot of bands keep putting out the same songs and the same albums, and they're happy with that and their fans are happy with that, but that's just not what we want to do.”

While this process of reinvention may have resulted in the band sacrificing a fan here or there, the singer will stand by his decision and the final product wholeheartedly.

“ Obsession marked where we were then, but this album definitely is a more mature one. It's a complete album and has a beginning and an end.”

Though his mode of expression may have changed, Hart, along with guitarists Keith Barney and Ken Floyd, bassist Mick Morris and drummer Trevor Friedrich, remains uncompromising in his musical intentions. Fans of the band's previous album, Obsession, were given a candid look into Hart's familial hardships and this album also sees him baring more of his emotions similarly, with the death of his grandmother doing much to shape his headspace.

“It was hard to deal with,” says Hart, “It definitely put me in a darker mood while writing this album.”

As with Obsession , Hart doesn't hesitate to lay himself out lyrically and show his vulnerable side. “It's never weird,” he says. “That's the whole point of music. I want people to be able to say, ‘I've been there. I've been in that break-up. I've lost a family member.'”

Though writing the album did aid him in dealing with certain emotions, Hart is also aware that some things still take more than a song to come to grips with.

“Today, I may be able to say I've dealt with these things, but those feelings are always there,” he says.

Listing the tracks “Broken Hearted” and “Last Night” as two of the more meaningful songs on the album for him, Hart also found a bit of the summation of his band's existence amid all the lyrical emotional wrenching. On “Victim,” Hart speaks of dealing with criticism and coming out on top, about which he says, “Even though it was directed at an old group of friends, I think it fits us.”

Fortunately for Eighteen Visions, any negative words that may get circulated are being balanced by just as much good buzz from newly won over fans. Taking a different approach to touring in support of the album, the band has opted to open for fresh, up-and-coming bands instead of touring as a headlining act just yet.

“We're not getting a lot of kids who want to hear old stuff,” says Hart, though he's quick to say that isn't necessarily a bad thing. “It's cool to do these shows and play to kids who may not have heard us or may have only heard of the last album.”

Luckily, underneath all those tattoos, the band members have grown thick skin over the years and will continue to be unfazed by their detractors. Because even though there will always be naysayers, people always know something real when they see it.

Eighteen Visions' self-titled album is currently available. The band will perform Dec. 8 at the Glass House, in Pomona. For more information, visit www.eighteenvisions.com.