All You Need is Love: A Change of Routine for Copeland 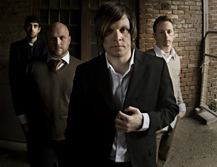 With its new album being titled Eat, Sleep, Repeat you might get the feeling that Copeland is feeling in a rut. But nothing could be further from the truth.

“It's kind of a little statement as to how hopeless and mundane life can be without the things that make it wonderful, like love,” says Aaron Marsh, the band's singer and chief songwriter. “The whole record deals with a bunch of different looks at love, not all of them positive. It's all kind of about what happens when the balance gets [thrown] off between love and the mundane; the very extreme highs and lows.”

Like any band, Copeland has seen its share of lows, but the roller coaster ride has been a thrill for the Florida-bred indie rockers lately.

In 2005 Copeland won Yahoo! Music's “Who's Next” competition and saw its In Motion album sell more than100,000 copies worldwide. The band's record label The Militia Group announced prior to the release of Eat, Sleep, Repeat that they expected the title to be the label's all-time bestseller.

Marsh is humble in his reaction to Militia's proclamation, saying, “That's a pretty huge statement; it's very flattering.”

The big success ironically comes at a time when Copeland is probably winding things down with Militia as the band's contract with the company is about fulfilled.

“We've been with the label for four years now and we've really enjoyed our time there but this is the last record on our contract and it's kind of bittersweet. We realize that we're going to be moving on and we really enjoy a lot of the people over there at Militia.”

So the door is now open for bigger and major labels to come courting, a process that Copeland is not entirely unfamiliar with.

Marsh says Copeland will be putting its full support behind promoting Eat, Sleep, Repeat for at least a year.

A good portion of Copeland's success derives from the fact the band is not formulaic in its style – the sound is very recognizable but not just a grouping of cookie-cutter sound-alikes. “Love Affair” for example is embellished with an instrumental flourish where horns take over to stunning effect.

Marsh says the song wasn't written that way, he added the horn chart when he found out he had access to the players. “It was kind of like just utilizing a resource. I figured the song was going to have a jazzy part at the end but I hadn't counted on the horns.”

On “Last Time I Saw Dorie” Marsh has a little fun playing the song's melody on piano while the same sound rolls on tape, backwards. “I was just messing things up a little,” says Marsh, adding that the song was inspired by the Woody Allen film, Stardust Memories.

“It's one of his artiest, most avant-garde films. It kind of has a lot of the same themes as our record has as far as the kind of hopelessness of life and the way love plays into that.” “Safer on an Airplane” is about, in Marsh's words, “How peace doesn't seem to be a priority anymore.”

The gist of the song is that while in flight you're for the most part cocooned away from the potential craziness of the world, an illusion not unlike the one you experience while listening to Eat, Sleep, Repeat . But as the members of Copeland will gladly tell you, you can make any positive illusion real. All you need is love.