Notes on a Scandal: Screening With Q&A 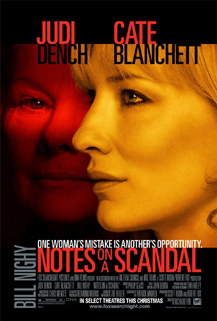 Reel Talk with Stephen Farber – which is now based at the Wadsworth Theater in Los Angeles – continues its fall season on Monday, Nov. 20 with a special screening of Notes on a Scandal , which releases in theaters Dec. 25.

Directed by Richard Eyre, who previously helmed Stage Beauty , Iris and television's “King Lear,” Notes stars the wonderful Cate Blanchett as Sheba Hart. Ms. Hart is an art teacher who joins the faculty at St. George's School as the new pottery instructor under the kind guidance of Barbara Covett (played by Judi Dench).

At first, things are going well for Hart, who seemingly has a unique ability to draw people to her kindred spirit. Her experiences at the school begin to change, though, when she delves into an illicit affair with one of her teenage students. Because of this, Notes becomes a story of loneliness, loyalty, envy and love. It is based on Zoe Heller's award-winning novel of the same name, and also stars Bill Nighy.

Following the Nov. 20 screening (which begins promptly at 6:30 p.m.), Farber – the film critic for Movieline's Hollywood Life and frequent contributor to both the Los Angeles Times and New York Times – will host a special Q & A session with director Eyre.

The Wadsworth Theater is located at 11301 Wilshire Blvd., in Los Angeles. Tickets are $17 per person ($6 for students with valid ID) per screening. Upcoming screening events are Dreamgirls (Nov. 27) and Off the Black (Dec. 4). For more information on the series or upcoming films, visit www.landmarktheatres.com.