Holiday Movie Preview: No Blockbusters, but Lots of Potential 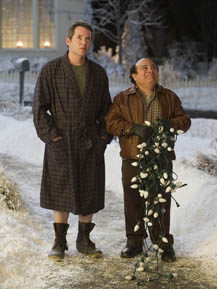 There's no Narnia this time around, no King Kong , no Lord of the Rings , no Grinch – and the only “Potter” this year is Beatrix, the subject of Dec. 29's Miss Potter . In short, no big “event” movie.

To be sure, there's Santa Clause 3: The Escape Clause , the latest installment of the reliable if unspectacular Tim Allen franchise.

And there are a few other familiar brands hitting the shelves: among them National Lampoon's Van Wilder: The Rise of Taj (Dec. 1) and Casino Royale (Nov. 17), featuring a new James Bond, Daniel Craig, in an old vehicle ( Casino Royale was filmed as a spoof back in 1967).

Theater fans are buzzing about Dreamgirls (Dec. 15), which has the advantage of big names (Eddie Murphy, Beyonce Knowles, Jamie Foxx) and the disadvantage of being a stage musical adaptation ( Rent and The Producers both bombed a year ago).

There may even be an audience out there for Rocky Balboa (Dec. 22), featuring Sylvester Stallone as the doddering palooka in an 11th-hour sequel that may do for his career what Myra Breckinridge did for the aging Mae West.

Certainly, there's no shortage of movies with holiday themes: Deck the Halls (Nov. 17), The Nativity Story (Dec. 1) and The Holiday (Dec. 8), not to mention the chiller Black Christmas (Dec. 25).

What there is not this year is an indisputably big, super-hyped holiday movie to anchor the season. But before anyone sheds tears over what Santa forgot to deliver, consider the up side: a number of unknown quantities, any of which could turn out to be the surprise must-see of the holiday season.

Such as? Night at the Museum (Dec. 22), with Ben Stiller as the night watchman pursued by a pack of living dinosaur skeletons. Or Eragon (Dec. 15), a medieval saga about a dragon. Or Apocalypto (Dec. 8), the Mel Gibson saga of the ancient Mayan culture, filmed in ancient Mayan. Or Pan's Labyrinth (Dec. 29), about a lonely Spanish girl who creates a mythological fantasy world in her back yard.

Not to mention a couple of CG-cartoon characters that could well take off with the younger set: including the dancing penguins of Happy Feet (Nov. 17) and the toilet-traveling rat in Flushed Away ( currently in theaters), a premise so revolting that it's virtually guaranteed to appeal to kids of all ages.

So consider this movie season as less the standard Christmas cornucopia than a holiday treasure hunt. Not many big-ticket items under the tree – but lots of cool little surprises if you look hard enough.

Let's Go to Prison – Career criminal and judge's son belly up to the bars together in Bob Odenkirk's (“Mr. Show”) comedy.

Bobby – Dreams die along with Bobby Kennedy in this ensemble drama about 22 people in the Ambassador Hotel the night the presidential candidate was shot.

For Your Consideration – Indie filmmakers are spinal-tapped for comedy in Christopher Guest's latest send-up.

The History Boys – The college-bound geniuses of Alan Bennett's play graduate to the big screen.

Tenacious D in: The Pick of Destiny – Jack Black and Kyle Gass are two guitarzans looking to be kings of the musical jungle.

Deck The Halls – Danny DeVito and Matthew Broderick are the Christmas light-heavyweights who get into an epic brawl about their garish outdoor displays.

The Fountain – The search for the fountain of youth drives Hugh Jackman to drink in this film with three parallel stories spanning 1,000 years.

National Lampoon's Van Wilder: The Rise of Taj – Kal Penn teaches stuffy Oxfordians how to shake some old-school booty in this sequel to the 2002 hit.

Dreamgirls – Beyonce Knowles, Anika Noni Rose and Jennifer Hudson battle to be the supreme Supreme in this adaptation of the Broadway musical with Jamie Foxx and Eddie Murphy.

Eragon – One dragon egg, over easy, brings a medieval farm boy (Edward Speleers) into conflict with an evil king (John Malkovich) in this sword-and-sorcery epic.

Pursuit of Happyness – Salesman Will Smith won't let his career (and spelling problems) get in the way of his son's (Jaden Smith) future.

Charlotte's Web – A spider (voice of Julia Roberts) spins webs of enchantment in this adaptation of E.B. White's children's story.

Night At The Museum – Dem bones, dem bones gonna rise again – much to the dismay of night watchman Ben Stiller.

Rocky Balboa – The champ (Sylvester Stallone) fights one last round on the way to the retirement home.

Children of Men – In 2027, human beings are no longer able to procreate, and Clive Owen is happy to do something about it.

Notes on a Scandal – Pottery teacher Cate Blanchett muddies her reputation by carrying on with a student.

Pan's Labyrinth – Lonely girl loses herself in a maze of mythological creatures.