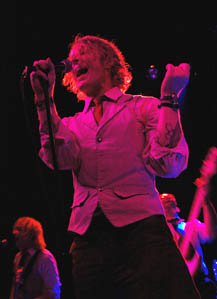 It was an atypical night at the El Rey from the start, for once spent noticing how utterly normal everyone in attendance looked. With the buzz that seems to have surrounded Say Anything as of late, typical high-and-mighty local elitists and obnoxiously clueless young'uns would have been the expected crowd demographic.

Consider judgment withheld, at least for the time being.

Brazil took stage first, playing songs from their new album, The Philosophy of Velocity, starting the night on a more progressive note. With their artful blend of rock and well-dressed out-there-ness, the Indiana natives' music might have gone a little over the heads of their audience, but frontman Jonathon Newby owned that stage with a confidence that was bravado-free, ironically.

Following Brazil, mewithoutYou took stage and were a little more quirkily weird and not quite as fashion-forward, but proved to be no less likeable, if not more easily accessible on first listen than Brazil. A bit more awkward in his stage presence, frontman Aaron Weiss didn't swagger across the stage with a sense of ownership, but he really didn't need to.

When he opened his mouth and wailed into his mic with reckless abandon, that was his domain. Even despite the monotony of his vocal tone, Weiss has an evocative quality to his style that goes beyond the need for outward showmanship, something not terribly common today.

Then, there was the highly anticipated Say Anything. Met with a deafening roar from the audience as soon as singer Max Bemis came into view, the audience was already singing in well-practiced unison before he could even let out the first notes of the band's set. With that kind of crowd response, one would expect the band to be more or less the top of the line in terms of performance and musicianship, correct?

Well, somehow the math doesn't quite add up in this equation. Neither likeable nor terribly diverse musically, the band fails to have any kind of resonance after any given song is finished. Maybe it's the oft-lauded lyrical prose of Bemis, but I'm skeptical of the merit of any singer who uses “Oh hell no, no” as the focal point of a song.

Somehow, the audience ate it up. It went beyond all reason or explanation, but those kids lived and died by those lines, which kind of says something. Kind of.
Article posted on 11/14/2006
This article has been viewed 1192 times.