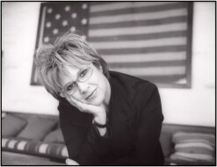 The force has kept a very strong hold on the life of actress/novelist/screenwriter/nerd idol Carrie Fisher. You may have recognized her in her big screen debut opposite Warren Beatty in Shampoo but galaxies, actually many galaxies far away know her from the classic Star Wars trilogy as Princess Leia Organa.

Leia, the imperial senator of Alderaan who in the third installment, The Return of The Jedi, adorned a slave girl golden bikini. That very image allowed many young male nerds to finally see a woman in a bikini and state proudly that, yes, they were finally a man.

But after all the ticket stubs, buttered popcorn or in this case, revised editions on DVD, Princess Leia is a movie character and Fisher is a real person. Fisher's life from the minute that she was born has seemed like a long-running film that ironically was turned into one, Postcards from the Edge, starring Meryl Streep and Shirley MacLaine. Though it is important to note that Postcards from the Edge (a fictionalized account of real events of Fisher's life) was originally a best-seller penned by Fisher herself.

One can expect that such stories from the novel and more will be told in 'Wishful Drinking', a one-woman show written and performed by Fisher. A roller coaster life can only be mitigated by laughter and luckily for her, she has a wit akin to that of Master Yoda.

Born in Beverly Hills, Calif. to Hollywood royalty (her father was singer Eddie Fisher, actress Debbie Reynolds is her mother), Fisher didn't achieve worldwide celebrity until she donned that legendary, slightly infamous Star Wars hairdo. It during that time in the late 1970s that she became addicted to drugs. In fact she was almost fired from the '80s film The Blues Brothers because of it.

In the years since, Fisher joined Narcotics and Alcoholics Anonymous, battled bipolar disorder, overcome an addition to prescription antidepressants and has seen some time in a mental institution. But overcome she has, as Fisher has become a guest speaker on the issues of addiction and illness. She has also won several awards in the fight to defeat these diseases.

You would think rhat alone would easily make for a compelling show, but looks can be deceiving. Fisher's life wouldn't be complete without a little bit of celebrity.

For a time, she was married to musician Paul Simon. They later divorced but to became entwined in a relationship again for several years afterwards. A relationship with CAA principal and agent Bryan Lourd led to the birth of Fisher's daughter Billie Catherine Lourd.

Fisher and Lourd's relationship ended however when Lourd left Fisher to be with a man. And yes, for a time Fisher was briefly engaged to actor Dan Aykroyd. Whew!

So what are you waiting for? Guys, grab that light saber of yours; girls, make your hair into two nice cinnamon rolls and GET UP AND GET OUT!

Geffen Playhouse is located at 10886 Le Conte Ave., in Westwood. Ticket prices range from $35-$110 and are available at www.ticketmaster.com. For more information, call (310) 208-5454 or visit www.geffenplayhouse.com.