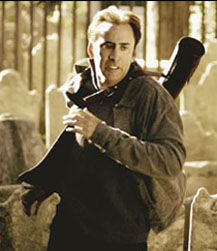 Just where do Nicolas Cage’s legendary eccentricities originate? While the actor admits he does have his obsessions and eclectic tastes, the root of his quirkiness is as evasive as the Templar Treasure. Any attempt to characterize the actor in any way other than the maxim "The only thing constant is change" is impossible. This is an actor who, in his roles and in his life, wants to avoid being typecast.

Questioned about who the man behind the leather coat is, the Oscar-winning actor will only tip his hand to a genetic treasure map.

"I’m very proud of my family. I think that it’s a family loaded with creativity," Cage says of his family tree, which includes Carmine Coppola, Sofia Coppola, Jason Schwartzman and patriarch Francis Ford Coppola. "But," he cautions, "with creativity comes a price. I mean, there’s the flip side of creativity, which is, as you say, the Center for Bizarre Behavior that goes along with that."

Benjamin Franklin Gates, the fortune hunter Cage plays in National Treasure, would no doubt be bunk-buddies with the actor.

"Without going into too much detail, I have had my obsessions – and certainly as an actor. Ben Gates is a character who’s obsessed about this treasure. I think I’ve been obsessed over the years with where I can go with acting or how I can challenge myself with that," he says.

One of Cage’s best-known obsessions is, of course, for everything Elvis (which includes former wife Lisa Marie Presley). However, before we can attempt to define Cage as an Elvis aficionado, Cage adds a qualification.

"I wasn’t listening to any of that stuff when I was a kid. My father was a strong advocate of classical music and so was my family. Carmine Coppola [who did the music for The Godfather] was a terrific composer and conductor, and this was always around me in the house.

"So I didn’t want to offend my father and play rock ’n’ roll. I was trying to be liked by him so I’d listen to classical music. I was a late bloomer when it came to rock ’n’ roll – a very late bloomer."

Trying to guess at what age this blooming took place is difficult, as the 40-year-old actor admits that he adds a year to his age.

"I always add a year to myself so I’m prepared for the next birthday. So when I was 39, I was already 40, and now I’m 41. But it makes me … I don’t want to say ‘happy’ because that’s too fragile a word, but I’m definitely content. And I’m hopeful about the future."

When asked about his career future, Cage wiggles out of anything other than an ambiguous response.

"It’s dangerous when you get trapped in an identity that is one-way. It can work because then the audience knows what they’re going to get and can rely on that person to do that type of movie every time," he says. "But that would be very boring for me; I would be calcified by that. I love keeping myself guessing and keeping you guessing."

Sigh. Then can we at least agree that you’re eccentric?

"I don’t know if eccentric is the right word, it’s just that I like to stay interested," Cage concludes. "I don’t want to get trapped. I never want to say, ‘This is my identity.’"