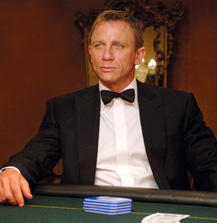 Casino Royale takes a huge gamble that moviegoers are ready for a fresh take on James Bond. And it wins the bet.

Featuring both a new 007 and new sensibility, the movie neatly blends a character-driven narrative with adventure-centered action. It suffers from the multiple-ending malady that afflicts Hollywood these days – and the last ending, which goes on for a good 20 minutes. But on the whole, it breathes new energy into a franchise that was slipping into a rut.

Daniel Craig takes over as the debonair super-spy. Like his predecessors, this Bond isn't one to back away from a fight, but it's clear that he'd rather outsmart his foes with good old-fashioned wits than blow them to smithereens with some over-the-top gadget.

Directed by Martin Campbell (of GoldenEye , the 1995 installment that introduced Pierce Brosnan's Bond), the movie is based on the first Bond book by author Ian Fleming, which was published in 1953. (Other than springing from the same source, it has no connection with the 1967 version of Casino Royale , a comedy that starred Peter Sellers.)

The story, set in the present day, involves a banker who caters to terrorist organizations. Bond's assignment is to bankrupt him, then offer protection from his angry clients in exchange for information about the various terrorist groups.

Craig ( Infamous ) provides the most-human 007 since the early Sean Connery. Sure, he's still James Bond, who always has one more trick up his sleeve. But he never crosses into the quasi-superhero status that marked the recent Bond movies.

He also brings much more depth to the character. This version of Bond has a chip on his shoulder, surfacing as arrogance with an undercurrent of anger. He struggles with professional detachment: Let's face it, it's hard not to take it personally when someone's shooting at you.

And he does something no Bond has ever done before: wheedle. The money for his poker buy-in comes from the government, which sends along an auditor (Eva Green, Kingdom of Heaven ) to keep an eye on it. Bond blows his first allotment on a bad bet, and in an ironic twist on the 007's seductive mystique, has to grovel to get more.

Speaking of wanting more, Craig is a sure bet to do that for viewers.