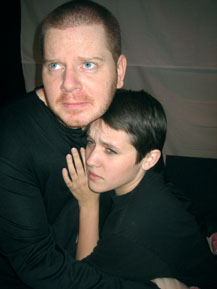 Sarah Kane was a very controversial playwright during her short life. She committed suicide at the young age of 28. It's no wonder, then, that she expressed some of the deepest aspects of her life pain in her art.

'Cleansed' is a graphic and disturbing example, the majority of which takes place in what appears to be an asylum. Dr. Tinker (Jeremiah Heitman) tinkers with his patient's emotions (and limbs) in an attempt to manipulate them. Tinker seems obsessed with the emotion of love and how it affects people. He treats his patients like lab rats as a means of learning more of the often-painful emotion.

As the play begins, we see the doctor and another man, Graham (Jacob Wolber) an addict who takes advantage of the doc for drugs. But the joke is on Graham when Tinker injects a lethal dose into him, causing immediate death. Dr. Tinker then takes his place above the stage to watch how things play out.

Graham's sister Grace (Kimberly Canfield) becomes a patient shortly after, grief-stricken by her brother's death. Another patient, Robin (David Stamps) is wearing Graham's clothing. Grace demands he remove it so she may wear it and we have our first nude scenes.

Grace puts on Graham's clothing, Robin puts on Grace's. The doctor now begins his game. The spirit of Graham, however, is still present with Grace and will continue to be.

In another part of the asylum, lovers Carl and Rod (James Kopp and Andrew McCarty respectively) discuss their love and their commitment to each other. These two guinea pigs' love is tested by Dr. Tinker's violent removal of Carl's tongue and limbs.

While the subject and the play itself will likely place long-lasting graphic images in the minds of audience members after the curtain call, I cannot help but wonder if the production could have been more sympathetic to its audience if it were done as a more naturalistic production. As it stands, it looks like a slasher film with a deeper context.

Normally, I appreciate the combination of the two. However, I would be more gung-ho had I felt what I was watching was real. This “realness” could likely be executed in the direction and the performances.

All of the performances were decent. In fact, two standouts, David Stamps as Robin and James Kopp as Carl, provide wonderful emotional performances.

In one scene, Tinker throws chocolates at Robin; chocolates that are sentimental to Robin because they were from his loved one. Tinker makes him devour each one during the scene.

In fact, this part of the scene takes at least ten minutes of no real dialogue, just Tinker throwing chocolates and Robin eating them. While the scene itself is drawn out and masturbatory, Stamps' performance is heart-wrenchingly good, as he wallows in his sorrow and eats every single chocolate in the box!

The show is interesting and intriguing to say the least. Sex, nudity, violence, dismemberment and incest all play a part in creating a shocking theatrical exploit. Even though I feel it could be a much stronger production, it is a decent endeavor.