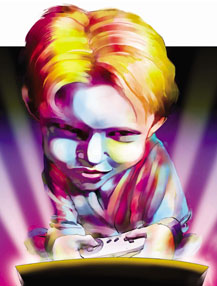 There are other worlds out there – violent, virtual domains where residents hurl lightning bolts at giant, dog-headed beasts and wield glittering swords during heroic quests.

Online interactive role-playing games such as EverQuest and World of Warcraft draw millions into their byzantine realms and complex social orders. Some become so enthralled that mental-health professionals are seeing patients who play as much as 70 hours a week.

What is an innocuous passion for many players is coming under increased scrutiny by therapists, and even gamers, as a potentially dangerous addiction.

“It was really ruining my life,” Bryan, 25, says of his self-described addiction to World of Warcraft, the industry's top-selling “massively multiplayer online role-playing game.”

MMORPGs, as they are known in the industry, are the parallel universe of gaming. Individually or in teams, participants adopt characters and interact via the Internet, often in battle. Guilds allow people worldwide to take part simultaneously in real time, keep rigorous game schedules.

Bryan quit playing Warcraft in September and fears a relapse. For more than a year, he devoted nearly 60 hours a week to the game. He gave up a job, lost touch with friends and developed carpal tunnel syndrome.

It wasn't fun anymore, says Bryan, who often played until dawn to keep from disappointing his guild. “It definitely became a job.”

Not everyone into Warcraft, EverQuest and other MMORPGs neglects his or her life. Those most susceptible have preexisting problems, such as depression or anxiety disorders, therapists say.

Temple University psychology professor Donald A. Hantula says he believes the medium is not to blame for dysfunctional behavior by its users.

“I know people who spend 40 or 50 hours a week playing golf,” says Hantula.

But Warcraft has an “addictive dynamic” that probably isn't accidental, says Kate Bennett, 32, a mental-health counselor who is an avid player.

“In the very beginning, the rewards come very fast and easy,” she says. Eventually, they get “fewer and farther apart ... but by then you're hooked on that feeling of accomplishment.”

Players can be seduced by a feeling of belonging and status within the group that they do not have in life. Perhaps the most powerful pull is that the games have no end.

Many dedicated players think talk of addiction is overblown.

“I play a video game and interact with people instead of watching TV,” says Robert Schneider, 29, a software developer and Warcraft player.

Schneider and his wife usually play when their 16-month-old daughter is asleep. They each put in about 20 hours a week – 12 hours less than the average American spends watching TV, according to Nielsen Media Research.

Relatively obscure in the late 1990s, MMORPGs are now a fast-growing segment of the game industry. Players purchase software, then pay a monthly fee. Warcraft, the biggest seller, was launched in 2004 and has more than seven million accounts worldwide.

Statistics about online role-playing games are scant. According to a survey of MMORPG players conducted since 1999 by Nick Yee, a Stanford University graduate student, the average age of players is 26, 85 percent are men and 36 percent are married.

In 2004, Yee asked MMORPG players if they were “addicted.” Of 2,218 respondents, about 14 percent answered “definitely” and 27 percent said “probably.”

Despite “potential pitfalls,” the games do foster relationships between players of racial, class, religious and age groups who may not interact in real life, says Dmitri Williams, a professor of speech communication at the University of Illinois at Urbana-Champaign, who has studied MMORPGs.

Paul Sams, chief operating officer for Blizzard Entertainment, which manufactures Warcraft, says in a written statement that the game is benign.

“Our games are designed to be fun and compelling” like a TV show or book, Sams says.

However, Liz Woolley founded the Web site for Online Gamers Anonymous in 2002 after her son Shawn committed suicide as EverQuest played on his computer screen.

After the 21-year-old's obsessive videogaming caused him to lose his job and apartment, Woolley placed him in a group home for those with traditional addictions. He was put on medication for depression and schizoid tendencies.

Eventually Shawn got a new place, bought a computer, and “cut off all contact,” says Woolley.

On Thanksgiving 2001, she found him slumped at his computer, dead from a self-inflicted gunshot wound. Woolley believes her son's absorption in the game led to his death.

The Sony Corp., which makes EverQuest, did not return calls for comment but has previously disputed Woolley's contention.

Gamers can find it progressively harder to extract themselves from worlds where the rewards come more easily than they do in life, says Bennett.

Vanquishing a dragon will always be more fun than “fixing a relationship or going back to school and working really hard to get all A's.”