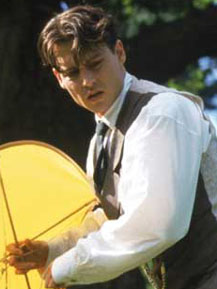 Finding Neverland, from gifted Monster’s Ball director Marc Forster, is a filmic swan song that champions the gift of believing in one’s imagination. It’s an inspirational tale, dealing with life, love and loss, centered around one man’s journey to create a classic children’s story.

The man, of course, is "Peter Pan" author J.M. Barrie (played by the chameleonic Johnny Depp) who, after a small string of unsuccessful plays and an eventual bit of inspiration, goes on to write the beloved tale of the boy who would never grow up.

Although Pan’s namesake comes from a young boy named Peter with whom Barrie forms a deep friendship, the "staying young at heart" aspect of the character comes from Barrie himself. Throughout the film, Barrie finds his inspiration not from his estranged wife (Radha Mitchell), but from a widow (Kate Winslet) and her four young sons who indulge him in his pursuit of endless games (such as pretending to be cowboys, Indians and dirty pirates) and pure backyard entertainment. Barrie falls in love with the lot and, as a result, finds it in his heart to write about their pretend adventures. The result, of course, is the extremely well received play "Peter Pan."

Depp is supreme in his role, as always, immersing himself in the childlike joy and gentlemanly generosity that encompassed J.M. Barrie. He’s soft-spoken but highly effective, and it’s easy to see how the gentle children’s tale came from the mind of such a man.

Winslet is wonderful as Sylvia, his muse, but the true standout of the film is 12-year-old Freddie Highmore, who plays Sylvia’s grief-stricken son Peter and the one with whom Barrie forms the most meaningful friendship.

Overall, the film – which also co-stars Julie Christie and Dustin Hoffman – is something to be treasured. It trumps time, champions imagination and teaches everyone – young and old – that the most important thing in life is to believe.

Finding Neverland is currently in theaters.