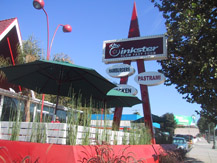 Eagle Rock is on the cusp of revitalization. This quaint little area lodged in between Glendale and Pasadena is on an ongoing crusade to compete with its next-door neighbors Echo Park and Silver Lake.

The road to preeminence lies along the stretch of pavement known as Colorado Boulevard; where you'll find a quirky coffee shop, a bar simply known as the Chalet and a Pilates center. But what has made the area a popular breeding ground for the on-the-go mom, collegiate hipster and the fun-loving geezer alike is the food.

It has been a slow process to achieve quick success so it is ironic to know that the latest establishment to break its bread there, cleverly titled The Oinkster, prides itself on the idea of slow-cooked fast food. It's an oxymoron that works perfectly. The proof is in the pig.

The brainchild of celebrated chef Andre Guerrero (Max, Se ñ or Fred) who melds his fine-dining repertoire with the breakneck business of casual food fare. The results show frozen meat patties and typical cheddar cheese squares thrown out and replaced with Nebraska Angus beef and Gruyere.

Don't even bother using the standard ketchup and mayonnaise condiments when you can upgrade with chiptole accented ketchup and ancho-lime mayonnaise. Those who prefer to stick to the safe side can order standard fare like Caesar chicken salad and quarter dark rotisserie roasted chicken meals. But like the name says, one comes to the Oinkster for the pig.

It's going to be a tough decision when you stand in line though: house cured pastrami or the barbecue, pulled-pork sandwich. The former, cured for two weeks, is rubbed ceremoniously with Oinkster secret spices and slowly cooked on applewood. The latter is brined with soy and honey and like the motto specifically states, is slowly roasted and smoked.

Both sandwiches are piled high with meat though for the veggie lover, the barbecue sandwich is served with a rich helping of red cabbage slaw and a bed of caramelized onions. Even though the bread holding both sandwiches is a bit unsatisfactory (often soggy), it is the meat in both that remains the star.

The pastrami with its spicy, smoked taste is delicious and after one bite one cannot stop. It's so good you'll be scouring for any tiny morsels that happen to fall out of the sandwich and land on the wrapper. The barbecue pork is no slouch either, so soft and tender it is nicely matched with the vinegar based Carolina barbecue sauce that is drizzled on top.

What is certain, however, is that Belgian fries must be eaten with either sandwich. Golden brown and made from fresh Kennebec potatoes, the fries are crisp in texture but the insides are as soft as they come. Dip them in either the chipotle ketchup or garlic aioli.

Like the front counter employee says, they're In-N-Out fries on steroids. 'Nuff said.