The NeverEnding Story: Nov. 25 @ the Rialto 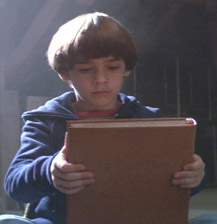 Before he went on to make such testosterone-heavy films as The Perfect Storm , Troy and summer's water-logged Poseidon , director Wolfgang Petersen showed off his lighter side with a fanciful fairy tale: The Never Ending Story .

Released in 1984, Story begins when a young boy named Bastian (Barret Oliver), still grieving over the loss of his mother, comes upon a mystical, magical book that he finds intriguing. Living in the book is Fantasia, a land created by humankind, which is dying at the hands of “The Nothing.”

A young warrior is needed to find a cure for Fantasia and the creatures it contains; and, as he is the one opening the book, this task falls into the hands of Bastian.

The Rialto Theatre is located at 1023 Fair Oaks Ave., in Pasadena. Tickets are $8.75 per person and can be purchased at the Theatre's box office or online at www.landmarktheatres.com.