On the Couch: Cartoons from the New Yorker 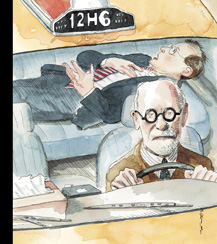 On his birthday every year – May 6, 1856 (didn't have to look that up) – I would, and continue to, celebrate with an extra-large banana split and by hitting on my mother. As I was lactose intolerant, the former sadly made me feel more nauseous than the latter.

But the man who puts the super in super-ego deserves it. Screw Time Magazine's November 29, 1993 issue asking “Is Freud Dead?”

In my defense, let me say that it's better to be obsessed with Freud than any of those other psychosexual stages he discovered … well, I have an ex that would disagree, but hey! What's that exhibition over there? (Thank you sweet, sweet sublimation.)

On the Couch: Cartoons from The New Yorker celebrates the 150th anniversary of the birth of Herr Doktor by combining two of the best signifiers of pretensia in the last century.   While New York-y in tone – the cover of the catalogue has Freud driving a taxi while a patient lies (both meanings) in the backseat – the cartoons are clever enough to be appreciated by pompous West Coasters as well. Even if your date doesn't ‘get' the jokes, he/she can enjoy all the pretty pictures of various couches that inhabit roughly 75 percent of the cartoons.

The only downside of the show is that it breaks with form-following function by not charging anything to visit it for an hour. Get on out to the Skirball, because as Freud once said, “Hey, you're only Jung once.”