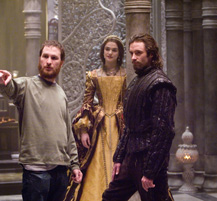 “If people are saying ‘No,' then you know you are doing something right,” Aronofsky says with a smile.

Told over the course of 1,000 years, The Fountain is truly a love story wrapped in a sci-fi epic. Any attempt at a specific synopsis of the film will inevitably end with “You just have to see it,” though.

What can be explained about the film is how the two central characters travel on parallel paths, which are rooted in a strong sense of dedication to one another. The film follows Tom (Hugh Jackman) on his quest to save Izzy (Rachel Weisz) from death, which he regards as a curable disease. Three stories interconnect and weave a narrative that spans from a Spanish Conquistador's quest in the Mayan Jungle to an adventure through a distant nebula unlike anything moviegoers have seen before.

“We wanted to reinvent what a spaceship looked like,” Aronofsky explains. “In the last few years, sci-fi has been hijacked by people making movies about trucks in space and ray guns. We wanted to make a film about the inner journey, not just the outer one.”

The film is the most ambitious thing that Aronofsky, who previously helmed the critically acclaimed Pi and Requiem for a Dream , has attempted to date – both visually and in narrative. The director notes that he has “spent the past six years on this project, so every frame has a lot behind it. There are connections between the stories that people might only notice on a second or third viewing.”

The Fountain has garnered a reputation for being less of a traditional film and more of an experience, which is all by design, according to the director. “It's so often that you go home from a movie, and can't remember what the hell you saw the night before. Then there are some movies that stay with you, and create conversation. It's always been a goal to do something like that.”

The film benefits greatly from heart-wrenching performances from both of its lead actors. In fact, the intensity of the film is just as striking to the viewer as the cinematography. Jackman explains the emotional levels of his role succinctly as “pretty full on.”

The role is a breakout opportunity for the actor, who has captured attention as an action hero, but here turns that physicality inwards. “I think finally I had a script that took me emotionally to my limit,” he elucidates. There's no point in putting it all out there on a script that doesn't demand it, but this one did.”

Jackman explains that this is “the most physically demanding role” he has ever done and he worked hard to delineate between the three characters that he plays in the film, and yet tie them together as one cohesive portrayal of a person who is in fact one man. As I said, you just have to go see it.

The film chronicles each incarnation of Tom's quest for a tree that is for all intents and purposes the fountain of youth, hence the title. The iconography of the tree is central to the film, and Aronofsky notes, the organic nature of much of the film is no accident, explaining, “So many films in the last few years have relied so heavily on CG, which is basically the opening titles of Star Trek , but better. Not much better though. We wanted to move away from that with The Fountain .”

What results is an interstellar landscape more akin to Stanley Kubrick's 2001: A Space Odyssey than to Star Wars . “We photographed microorganisms and chemicals under a microscope and then collaged them. That's what you are seeing on screen,” Aronofsky says, smiling proudly.

This lends the film itself a sort of life that many cinematic forays lack. The film breathes and, when it stops, so does the audience.

The Fountain is currently in theaters.