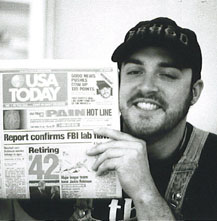 You ain’t nothing unless Harvey Weinstein says you are. That’s the tough lesson that budding filmmaker Troy Duffy learns from the king at Miramax. Duffy is the modern male Cinderella in Overnight who leaves his Boston hometown to seek fame and fortune as a musician in Los Angeles.

Duffy’s script, "The Boondock Saints," catches Weinstein’s attention and with a flick of his mighty hand, Weinstein gives the former bartender a wish that’s usually only dreamed about. Duffy will direct the script he wrote and his band, The Syndicate, will do the soundtrack. He signs with the William Morris Agency and, a few months later, is living his 15 minutes of fame.

Things then turn sour. One word from Duffy’s fairy godfather makes him poison in Hollywood and nobody touches the film. Duffy is soon blacklisted and both Miramax and Maverick Recordings, the soundtrack’s label, pull out.

Before the fall, Duffy agrees to let directors/producers Mark Brian Smith and Tony Montana film his four-year journey, and what was supposed to be the Hollywood dream, ends up being a nightmare.

The fact that Overnight was shot in black and white gives the documentary a gritty texture, á la film noir. There’s a lot of shouting – Duffy seems full of himself, which leads him to believe that both Miramax and Maverick will be nothing without him. He comes to a different conclusion, though, when Maverick refuses him entry into their building.

Overall, Duffy’s story serves as a cautionary tale on what happens when you piss off the right people. You see Duffy argue with people from Miramax via telephone, fight with members of his own band (which include his brother Troy) and lovingly refer to Weinstein as a "cock-sucker." It’s no wonder Duffy gets dropped. Smith and Montana capture every argument and peccadillo made by Duffy when he upsets his godfather.

If anything, Overnight shows what not to do when someone hands you your dream on a glistening silver platter: be grateful, and remember it can be taken away in an instant.