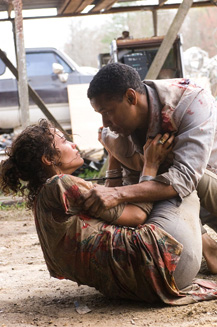 >Déjà Vu , a gorgeous if glacial thriller set in post-Katrina New Orleans, has a novel romantic twist: Boy falls in love with girl, then boy meets girl, then he meets her again for the first time.

Denzel Washington plays an ATF agent investigating a deadly ferry bombing. But the pieces to this heinous crime are stubbornly refusing to fit together until Washington's FBI counterpart (a dough-boyish Val Kilmer) brings him inside a secret government program that is exploring a fluke wormhole in time.

With his freewheeling cameras, director Tony Scott crafts the most sublime action scenes, but he spends far too much time trying to convince us that the premise of Déjà Vu is credible. So we have to sit through tedious debates between Kilmer and the program's chief scientist, Adam Goldberg, about Einstein Bridges and other theoretical physics.

The sleepy science seminar is all for naught because as soon as Washington starts battling time and destiny to save his lady love (Paula Patton) and stop the villain (Jim Caviezel), the implausibilities begin popping up like dandelions.

As always happens in movies, when you start mucking around in the past, it creates unforeseen consequences in the present. The problem with Déjà Vu is that many of these surprise ripples don't make any sense.

Washington is in heroic mode here, which means his usual Gary Cooperish performance. Except, for some reason, he has chosen to flavor the role with random manic moments, as if he'd been taken over sporadically by the spirit of Bugs Bunny. It's quite disconcerting. And for someone who has lived his entire life in the Crescent City, he bears not even the whisper of an accent.

Déjà Vu is well worth seeing for its visual brio, particularly the boom-crash opera of the ferry explosion, and a chase scene in which Washington is dodging downtown traffic on two temporal planes simultaneously.

Like Man on Fire , the previous collaboration between Washington and Scott, Déjà Vu is stunning but poorly paced, a film that manages to be both captivating and frustrating.

Even at its worst, Déjà Vu is never flabby or indulgent but, like Casino Royale , it starts with great flair and then progressively loses steam. In the end, it may be most remembered not for its sci-fi plot, but for its gripping depiction of postdiluvian New Orleans.

Déjà Vu is currently in theaters.