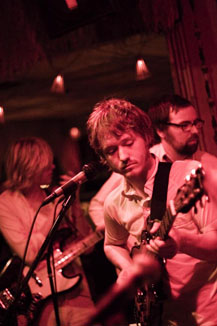 Nothing could be finer than just strolling down Venice Beach, headphones on and just feeling the warm sun on your face. It's something to feel happy about, especially when we know that the music and weather so firmly attached to the hip of Los Angeles will always be there for us waiting.

The two go hand in hand, and one doesn't have to look any further than the Parson Red Heads for proof. The sextet, originally from Eugene, OR, now call L.A. home. Rain has subsided, making way for the band's sunny blend of folk/indie pop. They love it.

The group sticks to the roots of its highly regarded luminaries via its own soulful acoustic sounds. For the Parson Red Heads, its their indie sensibility that manages to break out of the cracks by releasing an outpour of catchy melodies, ever-present handclaps and lush harmonies that would make any '60s predecessor green with envy.

The always proven sounds of folk/indie pop melding into one viable music hybrid can be found on the band's recent EP Field Mouse Carnival (Yukon Records).

While it may be a shock that the essential sounds that make up the musical base of the Parson Red Heads are not immediately displayed on the EP's first track “My Heart is Bursting,” the song still makes a profound effect. In due part because of the flourishing female vocals that are done a capella.

And as the calls of “I'm in Love” keep on being repeated, one can't help but feel the adoration. As they say, it's love at first sight, for the Parson Red Heads it's already love at first listen.

Though the adoration should single handedly be focused on the centerpiece of the EP, “Punctual as Usual.” Such trademarks as the breezy four part harmonies and a complete hand clap breakdown are there but it's the jangle guitar work and driving baselines kept in place by the tempo provided by the keyboards that accentuate the already proven factors of the band.

Fully capturing the band's lo-fi sound, “Punctual as Usual” is that worthy track that requires a trip to the beach and a little bit of brushing of sand off one's headphones. Such ambiance is necessary to hear all the multitudes of exuberance that will emanate out from the tune.

While the exuberance is also felt during the head-bopping rhythms courtesy of the tambourine (“Burning up the Sky”), the latter half of the EP is highlighted most notably by the final song “Speed Trials.” The track showcases the act's folk sounds: sparse on drums, lonely piano and a heavy dollop of acoustic .

While “Speed Trials” is the longest song on the EP, clocking in at over six minutes, it evokes a dream drone due to its scarcity. Most effective are Way's vocals, a slow burn that only heightens the minimalism throughout.

The band's next CD, entitled “King Giraffe,” will be released before the end of the year. The Parson Red Heads will have a December residence (every Monday) starting Dec. 4 at the Echo, in Los Angeles. For more information, visit www.theparsonredheads.com .