Divide and Conquer at Costco: Buying in Bulk, Sharing the Bounty 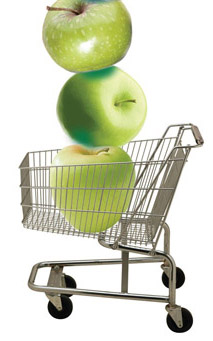 Food can be cheap at Costco. Young, single people like cheap food. But what young, single person buying food only for herself needs four pounds of peanut butter and a five-gallon keg of crackers?

A group of wholesale-savvy food-sharers have learned to outsmart the system – even if it means they have to go through the hassle of splitting up bulk-packaged groceries and complicated receipts with friends, neighbors or housemates in order to get the deals.

“When I'm at Costco, I think, this is so cheap I can't not buy it,” says Rachel Dodson, 22, who shares her bulk-food purchases with her roommate and her neighbors.

“Most of the time it works out really well,” says roommate Stevie Glaberson, 22. Like many bulk-grocery shoppers, Dodson learned to share the hard way. “I've gone down there without a plan and ended up spending the week shoving my face with 50 tomatoes or enchiladas or whatever, just so they didn't go bad.”

While it's relatively easy to share food with Glaberson, things get a little more complicated when Dodson tries to swap economy-size garlic salt with her neighbors.

“Certain foods are definitely easier than others,” says Dodson, who recently decanted half of a 5-pound bag of trail mix into zip-locking bags for one of her neighbors.

“Last time we bought apples, we had to have an ‘apple draft.' We laid them all out and then choose one at a time,” she explains.

But for Jonah Burke, 26, who used to share food with his six housemates, all of whom paid for food separately, physically splitting up the bounty of groceries wasn't the hassle. The problem was splitting up the cost. Burke's seven-member household would make the pilgrimage to Costco about twice a semester, spending approximately $800 to $1,000 each time.

“Afterward, we'd have to go home and make an Excel spreadsheet,” Burke says. “We'd list how much everything cost in bulk, how much per item, and whether or not each person wanted some of it. It actually worked out really well.”

Burke's most recent spreadsheet alphabetically lists 107 food items along the Y-axis, and members of the household along the X-axis. A household member would indicate he'd like to share, say, a “Barrel of Pretzels,” by placing a “1” in the column under his name, in the row labeled “Pretzel Barrel.” If only three of the seven-member household wanted to share the pretzels, that $5.99 would be split only in thirds.

“That way, no one was saddled with someone else's indulgent purchases,” Burke says.

Despite the initial labor of creating a spreadsheet, Burke says that sharing the cost of wholesale bulk-quantity food was noticeably cheaper and easier than if each member of the household shopped at a local grocer each week.

If decanting dried goods or enlisting Excel to figure out your grocery bill isn't your bag, Dodson advocates at least sharing the annual dues, which range between $50 and $100, depending on membership status, of a Costco Club membership.

According to Costco Club rules, two people living under the same roof, regardless of their relationship, can share a single Gold Star membership.