Dance, Dance: Get into the Grove with Disco Rockers the Rapture 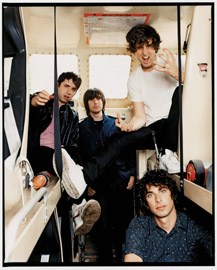 When New York's disco-punk-funk quartet the Rapture released its dance classic House of Jealous Lovers in 2002 – launching a dance-punk revivalist movement in the Big Apple – the stage was set and the world was at the band's hands. Everything seemed just right: the cowbell-driven rhythms; the sing-a-long verses and clap-a-long drumming; frontman Luke Jenner's piercing repetitive vocals.

A small, but loyal fan base grew during the year-long gap between the band's debut (the indie hipster treasure Echoes ) and the release of House of Jealous Lovers which launched the group's cult-like status. The Rapture seemed to roll out the red carpet for other mainstream acts to piggyback off their growing buzz and sound.

The Bravery had a short-lived stint with “Honest Mistake,” but it was the powerhouse better known as the Killers that completely capitalized off the electro-clashing, '80s resurrection that the Rapture helped launch. No hard feelings on behalf of the Rapture though.

With its recent release, Pieces of the People We Love , the band has dropped the punk in its disco-punk and replaced it with dance, funk and acid house synthesizers. Without aping its sound, the Rapture drew from a slurry of influences that helped shape the new album: the Gap Band, various jazz recordings, early Prince and the drums from Michael Jackson's “Thriller” and “Billie Jean.”

“ Echoes as being the first album is kind of all over the place,” says Gabriel Andruzzi, the band's keyboardist, saxophonist and all-around music man. “I feel like there's lots of different types of songs [on Pieces ]. I think we wanted to make this record a lot more centered. We wanted to keep moving rhythmically throughout the record.”

For its second time around, the Rapture took a different approach to its music. Citing glam rock and contemporary techno as two of the driving sounds, Pieces touts a new flavor for the band, along with few new faces on the production side.

Almost as danceable as “House,” the leading single off Pieces , “Get Myself Into It,” boasts the album's biggest hit potential – only after the opening track,“Don Gon Do It.”

While his cowbell-playing skills aren't as prominent on the track, Andruzzi's sax blowing is the heart behind “Get Myself,” an almost instantaneous party-starting cut that just barely misses the cult-classic status of “House.”

Aside from a few songs, including the title track, “First Gear” and the ballad-like “Live In Sunshine,” the majority of Pieces is a dance-crazed time bomb waiting to explode. The definitive sound of the album is summed up with the cleverly and perfectly titled “Whoo! Alright Yeah…Uh Huh,” a haven for disco and electro clash dance fiends that showcases the band's ability to harmoniously mesh glam rock, dance pop and disco fever into an amalgamation of sheer energy.

While its recordings have helped the Rapture establish itself as the forerunner in the disco-punk-dance revivalist movement, the band's live show is what has further fueled its buzz. Upstaged by Andruzzi's wild, one-man, onstage dance off, the Rapture is know for igniting unprecedented audience participation: all hell breaks loose on the dance floor during “House” and “Echoes,” both from their debut album.

“We all kind of grew up in some sort of do-it-yourself scene,” says Andruzzi, hands down the star of the Rapture's live show. “It was really important for all of us to see live bands. It's almost more important to play a live show than record an album. I really like sitting in studios and recording, but you don't ever get this feeling of playing a live show and losing yourself in it.”

Pieces of the People We Love is currently available. For more information, visit www.therapturemusic.com .