Simple Precautions: Can Protect You From Burglars 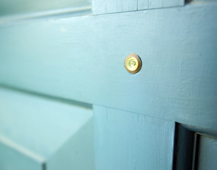 Apartments are easy targets for burglars.

“You have a lot of people coming and going, and you also have a lot of residences close together,” says Sgt. Dan Ward, spokesman of the Lawrence, Kan., Police Department. “So somebody strange can blend in easily.”

Ward has worked a lot of apartment burglaries, including ones that occur while college students are on Thanksgiving and semester breaks. Some might have been prevented if the residences had looked lived in while the tenant was away. Here's what Ward, a security-device manufacturer and a handyman suggest:

Obviously, lock them, even when you're at home. And never leave a key under a potted plant or the doormat – burglars have been onto that for decades.

Burglars are forever kicking in doors to get inside apartments. Consider installing a strike plate into the doorframe. Burglaries also occur when people are at home, so you might want a keyless deadbolt, too.

Secure sliding doors to patios and balconies with pull-down bars. For added protection, place a wooden dowel that fits snugly in the bottom track.

Consider a wireless alarm. They cost about $7 for a simple one to $35 for a device with a remote control at hardware stores and home-supply centers, says Lauren Russ, spokeswoman for Intermatic, an Illinois company that makes wireless home-security equipment.

In apartments versus single-family houses, these devices can be more effective because the residences aren't so spread out. “The alarms can help,” Ward says. “They make a loud noise. Someone's not going to stick around if one goes off.”

Make sure they're locked. It's important to keep blinds shut and shades down at night and when you're away. You want to block a burglar's view of what's inside your apartment.

Wireless alarms that operate with magnetic trips can be used on windows. They often come with anti-theft stickers.

It's important to make sure lights come on at night. This can be done using something as simple as a sensor in a table lamp that automatically illuminates when it's dark or by using a programmable timer. More sophisticated light-control systems cost about $100.

Turn off the ringer when you're away. Burglars are savvy at connecting residents' names with phone numbers.

Sometimes they stand outside an apartment and dial the tenant's number. If no one picks up, the burglar breaks in. But if the phone ringer is off, the burglar thinks he dialed the wrong number.