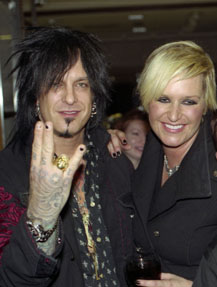 At the moment, they're one of the fashion industry's most unlikely couples.

He's Nikki Sixx, the bassist for Mötley Crüe, who often says that he used his body as a chemistry set.

She's Kelly Gray, a former exec with St. John, her family's knitwear line, and its “face” in over-the-top ad campaigns.

“It's an unlikely combination, but we're more alike than what people think,” says Gray.

The duo's Royal Underground clothing line is geared to the guy who wants a rocker look, but with luxe fabrics (cashmere, antiqued leather) and details (hang tags resemble concert tickets).

Here's what Gray has to say about Royal Underground, how she met Sixx (real name: Frank Carlton Serafino Ferranno) and more.

>So, Tommy Lee (the Crüe's drummer) introduced you guys?

We met through Tommy at a Mötley concert, but we didn't hit it off all that great at first. I was so scared of him that I called him Mr. Sixx.

How did Royal Underground come about? Where did the fashion connection get made?

It was a couple months after the tour, and we got together for lunch and he talked to me about having a passion for the business. I had always admired his style, which I probably didn't tell him about on tour because I was too afraid of him. And I said let's go shop the market and see if there are any places that we can penetrate.

I found that the market was heavily “skull”-ed. Everything was torn and shredded and watered-down looks of what designers thought people were wearing onstage. Having a real rock star who has been designing his own clothes since he was a teenager as a partner appeals to me. There would be an authenticity that no other designer could have.

This is very different from St. John. Were you just ready for a big change or to do something else?

No, to be honest, I was quite happy not working. But when I did work, I was very passionate about the business. If it weren't for Nikki's passion, I wouldn't have come back.

The press release mentions that the pieces in the Royal Underground line might have a few “naughty little secrets.” Can you share one?

The “Sundays Are For Rest” jeans have a back patch that says “Sundays Are For Rest,” which most people will probably assume is the label of the jeans. When asked, you can or you don't have to share that when you cuff up the jeans, it says “Blondes are for Monday, Wednesday and Friday” and “Brunettes are for Tuesday, Thursday, Saturday and Sundays are for rest.” Inside the fly, there's a ruler that's scaled in the gentleman's favor.

What's your favorite piece in the first collection?

It's a Nikki piece – a hoodie with a crown printed into the hood and it's cashmere. Actually, Nikki and I are pretty much fighting over who gets the first one.