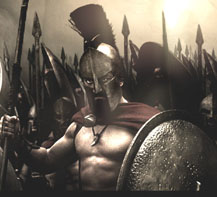 As with any grand-scale war battle or guts and glory epic, you win some you lose some. Whether its nation vs. nation or brother against brother, slinging swords or firing missiles, more often than not success is an act of random chance.

“In making this movie, I want people to have that ultimate movie-going experience, like the first time you saw Star Wars or the Matrix ” he says.

Based upon the graphic novel of Frank Miller, 300 tells the true story of the 480BC battle of Thermopylae in which King Leonidas (Gerard Butler, Phantom of the Opera ) and 300 Spartans fought to the death against a massive Persian army (of nearly a million) over three days.

Though the film isn't scheduled for release until March 2007 – finishing touches are still being done – footage shown at San Diego's ComicCon and a few select screenings earlier this year has helped generate some promising buzz.

This is partly due to the respected work of Miller, whose first graphic novel adaptation, Sin City, was a success at the box office last year.

But there was a point when 300 almost wasn't made.

Greece had already been covered with the film Alexander, Troy was already in the works and Miller had no intentions of turning his novel into a film adaptation.

But after meeting with Snyder and witnessing his enthusiasm for the novel and subject matter and having similar point of reference and ideas, Miller's excitement grew about the idea of his novel being on the big screen. Warner Bros. also reconsidered the idea and gave Snyder and Miller the go ahead.

“We put a team together of bright eyed kids that approached this with verve and humor and who just couldn't seem to get the story out of their heads,” Miller says.

In approaching the film, Snyder says it wasn't about reinterpreting the book, but doing his best to make it come alive on film.

“A book never presupposes a visual, but when text is a visual, you have an obligation to respect that,” Snyder says. “The spirit of the book and the movie maintain the same aesthetic.”

It was no easy task explains both Miller and Snyder. Rather than splashing out a huge budget, with $60 million – a much smaller budget comparatively speaking – and with only 60 days to shoot, they had their work cut out for them.

“It was really tough getting into the groove of things,” Snyder says. “Ninety nine percent of the film is just sweat and muscle.”

Using blue and green screens as backdrops, and opting to create sets digitally using similar techniques as in Sin City , the comic book feel of 300 is present.

The colors are intense and heavily contrasted, and use of narration helps set the mood for the film with distinctness not seen in other battlefield sagas.

“We wanted to show the exotic culture, to show the opulence of the Persian Empire in contrast to the Spartans,” explains Miller.

In approaching the story Miller asked himself, “If I were a Spartan, what would I picture?”

“How would you remember it,” he asks. “No one from Greece had ever seen an elephant before so you might picture it 70ft tall.”

In that sense, the film combines an element of exaggeration and fantasy, humor and a good amount of ass kicking as well.

“I love violence, it's a disease,” the director says. “And yes, even a good king can bleed.”