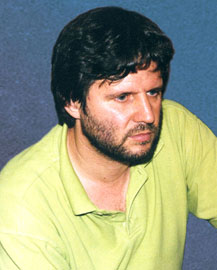 For many Argentineans, 1978 marks an unforgettable year. It was the year that their football team won the World Cup. It was also the year that many of their family and friends disappeared, never to return.

“It was a day of happiness in Argentina,” says filmmaker Gaston Biraben. “At the same time, it was the high point of the dictatorship.”

Biraben's own intimate experiences with that devastating period, known as the “Dirty War,” would come to inspire Cautiva . During the same week that he was celebrating the World Cup Victory, friends of his family were being abducted. Two of those three siblings were pregnant women and to this day, he says, their mother is still searching to discover what, if anything, happened to her grandchildren.

Those grandchildren and children of the “disappeared” are represented in the central character of Christina (Barbara Lombardo). It is through her that Biraben, who wrote and directed this stunning debut, conveys how the disturbing past of Latin American politics haunts the present.

“The story is based on many cases. Not one particular case,” he says. “I wanted to make a film that reflected the plight of children to find their real families from which they were taken. I was really trying to focus on the human aspect of the political conflict.”

Opening with scenes from both the World Cup and Christina's lavish quincenera, the year of her birth is juxtaposed with the present year that would come to mark her personal discovery. As an only child, Christina is raised in an affluent Buenos Aires neighborhood with two loving parents. By all standards, she is privileged.

So when a government official tells Christina that her real name is Sofia and that her real parents are not those who raised her, she immediately denies the divisive truth. What follows is a difficult personal struggle to cope with the issues of truth, politics and identity.

“There was not one single film about this subject matter from this point of view of someone who went through this experience,” Biraben says. “It was a very unusual take on this story in terms of what happened with the next generation, not the ones who disappeared.”

Through Christina's perspective, her notion of trust unravels. She no longer has the choice to remain naïve. As she finds out about the true nature of her birth and the wrongful ways of the people she believed to be her parents, she comes to understand just how forcefully politics played into her destiny and into the lives of the parents she never came to know. The aftermath of political disappearances becomes all too real for her.

When Cautiva opened in Argentina, it expectantly triggered a painful experience for viewers as many citizens had experienced the effects of the former dictatorship one way or another.

“There was a large number who had a hard time seeing a film like this because it was dealing with very deep wounds that had affected the whole society,” Biraben says.

Unlike Christina, Biraben was politically aware during his time in Argentina, informed by the awareness that permeated that time and in no doubt played into his commitment to making Cautiva .

“My coming of age was very much related to the political coming of age in the '70s. We were in the midst of social change that actually was stopped by the coup of 1976.”

After claiming the lives of as many as 30,000 Argentineans, the “Dirty War” ultimately ended in 1983 with the removal of the military dictatorship. Although many military officials did not face criminal charges for their war against citizens due to Amnesty Laws, the Argentine Supreme Court overturned those laws in 2005, allowing cases to be re-opened involving crimes against humanity.

For those victims such as Christina, the new laws provide, at least, one route for rectifying the past and moving forward in the present.

Cautiva is currently in select theaters.