Will Smith and His Son: Believed in the Pursuit of Happyness 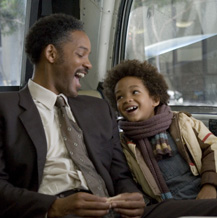 The Pursuit of Happyness is an inspirational drama based on the true story of Chris Gardner, a struggling salesman in 1980s San Francisco who works as an unpaid intern to compete for a stockbroker's job – while sleeping in homeless shelters and subway station bathrooms after he and his son are evicted from their apartment.

“I connected to Chris' story as being in the spirit of the very design of America,” says star Will Smith.

“All you have to know to understand how brilliant Thomas Jefferson was is the promise he wrote to Americans: Life, liberty and the pursuit of happiness. He didn't say we deserved happiness, or that the government could provide it. It's the pursuit that matters, the opportunity to make that pursuit. That's what makes America unique. People like Chris Gardner.”

Gardner's story came to Smith's attention after it was told on ABC's “20/20” in 2003. The film is true to Gardner's story except for one detail: His son was 2 when he accepted the internship, but in the movie, he is 5. He is played by “a remarkable, intuitive” first-time actor, Jaden Smith – Smith's 8-year-old son with his actress wife, Jada Pinkett Smith.

“Jaden was lying in between Jada and me when I was reading the script, and he asked me what the story was about. I told him, and he said, ‘Daddy, I could do that, I could play that boy.' I said, ‘Oh, really?' But he was serious.

“So Jada and I talked about it, and we told him look, maybe you can, but you don't just get the job because you're my kid. You'll have to audition like everybody else, and you may not get it, that's how it works. Can you handle that?

“He promised us he could, so Jada took him to the first round, where there were about 100 kids being looked at by the director and casting director and producers. They whittled it down to 50 and he made the cut, and after that he was unshakable. I was in his corner, but I didn't have his back. He earned the job himself, and that's the way it's supposed to be.”

Smith says Jaden soon learned that Daddy and Mommy's job wasn't all fun. Jaden had difficulty, Smith says, in finding his motivation for one of the film's most emotional scenes, which involves the loss of his character's only toy. “His parents have money, he's got all kinds of toys, he couldn't understand why this was such a big deal he had to cry,” Smith says.

When it was over, the young actor made a declaration: “He said, ‘Dad, from now on, I think I'll just make comedies.”

Smith, a voracious reader and “full-time student of the universe,” says he followed the recent vote to end affirmative action in Michigan, and while he says he was enormously disappointed, he can understand why “good people with good intentions” voted for its passage.

“As a black American, I am 100 percent in favor of affirmative action. But Jada always talks about the beauty and the pain of the true political process. She believes every paradigm ends in paradox, that the result can be the worst thing and the best thing at the same time.

“The very thing that sparks one person can break another. For Chris Gardner, defeat only made him work harder and believe in himself more. And that's positive thing.”

The Pursuit of Happyness releases in theaters Dec. 15.

Interviews
Maleficent doubts her fitness as a mother. So did Angelina Jolie
682 views