Beer Decline: Spirits are high for Young Drinkers, but Beer Gets Left Out in the Cold 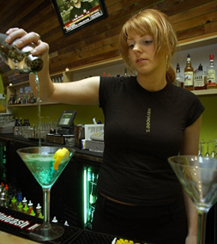 Just shy of her 22nd birthday, Kelly Bannen is the type of customer that big brewers such as Anheuser-Busch Inc. and Miller Brewing Co. pay dearly to reach.

Bannen’s age group, people 21 to 24, account for 30 percent of the nation’s beer consumption. Get ’em while they’re young, and you could win a lifelong customer, marketing experts say.

There’s just one problem: Bannen is among a growing number of young drinkers who don’t like beer.

"I think it tastes really bitter," said Bannen, a senior at Marquette University in Wisconsin. "I like sweeter things to drink."

Since 2000, beer’s share of the overall alcohol beverage market has eroded, while the share held by wine and spirits has gained ground, according to New York-based consulting firm Beverage Marketing Corp.

Much of beer’s decline is tied to inroads that sellers of vodka, tequila and other spirits have made with consumers in their 20s. Propelled by aggressive marketing, a new generation of drinkers is showing a growing preference for sweeter drinks, such as martinis and other cocktails made with fruit-flavored spirits.

Some of those drinkers, including men, who account for over 80 percent of U.S. beer consumption, still imbibe a frosty brew. But they are less loyal to suds, and more willing to spend an evening at the clubs sampling a wide range of concoctions.

"They have a great thirst for variety," said Robert Lachky, Anheuser-Busch vice president of brand management.

St. Louis-based Anheuser-Busch launched a new beer in early October spiked with caffeine, ginseng and fruit flavors to help broaden its appeal to young consumers. Other new drinks may follow, said executives at the company, the nation’s largest brewer.

Miller, for now, is largely avoiding such new products and remains focused on selling beer. Company executives believe they can grab more customers, including young ones, by continuing to focus on core brands such as Miller Lite. Miller also is ramping up its aggressive program of conducting sampling promotions at bars and clubs – something spirits distillers have also used during their recent growth spurt.

Miller executives say they are well aware of the threat beer sales face from the rising tide of vanilla vodkas, raspberry martinis and other sweet spirits. The stakes are high for brewers like Miller, which has around 1,800 employees in Milwaukee.

"Wine and spirits have done a great job of attacking us by creating consumer excitement," Miller president Norman Adami said in an October speech to a group of Illinois beer distributors. "Let’s not kid ourselves about that seriousness of that challenge."

"People used to say, `I am a Bud drinker,’" Lachky said. "They don’t say that anymore. People now switch around with what they try."

Along with traditional advertising, the distillers pushed their new drinks by cultivating relationships with bartenders and waiters, said Bellas and Eric Shepherd, editor of Beer Marketer’s Insights, a trade publication.

"The distillers would train the waiters to ask if you want a cocktail," Shepherd said. "They wouldn’t ask you if you want a drink."

Promotions at bars and clubs have helped build demand, said Tom Wackman, who operates three downtown Milwaukee establishments. Those promotions often include free or reduced-cost samples, supplied by the distillers and their distributors, Wackman said.

Beer is still the most popular alcoholic drink in the United States. Industrywide, sales volume dropped slightly in 2003, by 0.9 percent, according to Beer Marketer’s Insights.

"As a category, we must collectively convince retailers that we are worthy of more of their confidence," Miller’s Adami said in a July speech at a beer industry summit, sponsored by online trade publication Beer Business Daily.

"There’s a whole flock of young people who have become absolutely bored with beer," Pirko said.

Part of Anheuser-Busch’s strategy to cultivate young drinkers was seen with the debut of B-to-the-E, a caffeine-infused beer flavored with ginseng and guarana, a tropical berry that grows in the Amazon region of South America. It also will have aromas of blackberry, raspberry and cherry.

The new drink will be aimed at people ages 21 to 27, and will be packaged in a slim, 10-ounce can, instead of the traditional 12-ounce beer can. That has drawn comparisons to Red Bull, the sweet, caffeinated "energy drink," sold in slim, 8.3-ounce cans, that has become a popular mixer with vodka at trendy clubs.

Lachky said B-to-the-E will compete with "the distilled spirits experience" at clubs and bars. He also suggested that Anheuser-Busch might look at producing other drinks aimed at the younger crowd.

At Coors, the strategy includes a focus on consumers in their 20s featured in TV ads for Coors Light, the company’s main brand, said Laura Sankey, vice president of corporate communications.

Also, the company has test-marketed an 8-ounce can for Coors Light in Texas, the nation’s second-largest beer market. That slim package is now being rolled out in other parts of the country, Sankey said.

"Those are flavors we found are currently popular in bars," Sankey said.

Miller’s focus on beer has helped revive sales of its Lite brand after a decade-long slump, said Robert Mikulay, executive vice president of marketing. Miller Lite’s sales are up 11.4 percent through Sept. 5, compared to the same period in 2003, according to Chicago-based data tracker Information Resources Inc.

Now, Miller is putting more resources into developing its other brands, such as Miller Genuine Draft and High Life, Mikulay said.

Instead, Bannen prefers sweet cocktails, such as tequila sunrises or Long Island iced teas – the latter a potent mix that includes gin, rum, tequila and vodka. Johnson’s favorites include a mix of Malibu rum and pineapple juice.

"Beer," Johnson said, "has a very odd taste that I cannot get accustomed to, no matter how many times people tell me it’s an acquired taste."