Mickey Avalon: Mythology in the Making 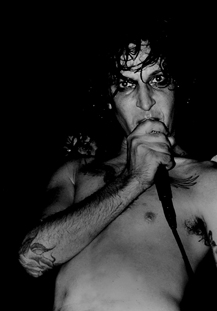 “I don't want people to think of me as a MySpace novelty.”

If you know who Mickey Avalon is already, you're probably wondering how he can get away with saying something like that. Like, he knows who he is, right?

If you're out of the know on Avalon, however, the arguably self-unaware non-musician by his own definition has emerged as the eminent king of all things indulgent and excessive in Hollywood's club scene. A modern-day punk rock and hip hop driven Bacchus, worshipped by asymmetrically coiffed, pre-teen Bacchae.

That is, if you buy into all the hype you hear about him, at least.

“I'm talking about my life and trying to speak the truth as much as I can,” says Avalon of his sometimes, questionable musical intentions. “The shows have kind of turned into a party and I'm expected to bring the party and that's a job I can rise to the occasion for, but I don't think I'm larger than life. I'm happy to be able to do this, I feel blessed.”

Just to be fair, however, he does quickly admit, “I'm not trying to be falsely humble, I think I do what I do better than most.”

With his growing status as a cult icon and symbol of everything that's awesomely cool and entirely wrong with the L.A. music scene, Avalon is also very aware that there is a balance to his success. “The more people want from me and the better it gets – not that I'm complaining – it definitely gets weirder,” he says.

While Avalon doesn't hesitate to share the sometimes sordid details of his personal life through his semi-fictionalized lyrics, he does at times wonder if the wild fantasy party atmosphere he's known for overshadows the very dark and very real undertones to his music.

“I definitely think on the bad nights that it's just a trend,” he says. “I think the older people definitely read more into it but even the people that don't, that's fine too. I've learned in playing shows that there's nothing wrong with going out and having a good time. I just want people to let their guard down a little bit, without getting in too much trouble.”

Even for all the cockiness and bravado he exudes when he takes the stage, Avalon still maintains his modesty when talking about himself and his career aspirations. “I never thought of myself as a musician but I go on the road and play every night,” he says. “I don't know if my music will win Grammies, but do I think it's good enough to go up against what's out now? Definitely. And I think I put on a pretty good show.”

When surrounded by debauchery by profession and falling victim to it by reputation, Avalon admits that staying grounded can be a challenge at times, but luckily he's built a solid social circle to keep things in hand. “You have to know what's important,” he says. “You make so many sacrifices that you have to be careful that you don't end up fucking the people that do care about you just to ride some party wagon for 15 minutes.

“Luckily I have really good friends and people around me so I haven't gotten caught up on this trip. The more people treat me as larger than life, the more I almost retreat into the people around me, so you have to know who your friends are.”

Another lesson that was undoubtedly learned the hard way, Avalon has come a long way from his oft hyped rough beginning to stand before you as a musical mastermind or a tequila-soaked flash in the pan. And really, he's OK with you thinking that he's either.

“Just have a good life and don't believe all the bullshit that they tell you, but make sure that whatever you do, you're willing to pay the consequences,” he says. “I'm paying them every day.”

Mickey Avalon's self-titled debut is currently available. He will perform Dec. 31 at the Roxy, in West Hollywood. For more information, visit www.mickeyavalon.com.