Welcome Home...: Is it Time for a Curfew? 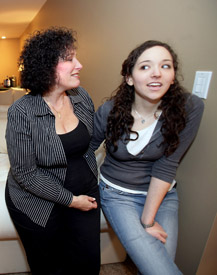 While home during a break from North Carolina A&T, where she's a sophomore, Rickelle Winton casually mentioned to her mom that she was having a friend over.

They planned to watch TV in Rickelle's bedroom.

“No way,” said her mom. Rickelle's friend is a guy.

“I told her I didn't think that was fair because I have boys in my room in my dorm,” says Rickelle.

Dorm's one thing; home's another, her mother, Doreen Odom, told her.

Parents and their children that come home for the holidays are bound to have similar discussions as college students accustomed to living by their own rules return home to live by their parents' rules over the winter break.

“At school, you could come home at 4 o'clock in the morning and she'd have no idea,” says Rachel Kay, a University of Michigan sophomore, referring to her mother, Janice Kay. “It is a frustrating thing when you're used to being on your own, but it's understandable because she's my mom and she worries.”

The holiday season will be a happier time for parents and students if they talk about and agree on rules, curfews and plans for the holidays.

And the sooner the better.

Janice Kay says she understands the frustration, but she needs the peace of mind.

“We talked about it and I told her that when she stays with me, she needs to let me know where she is and when she'll be home. If she's not going to make it home by that time, she just needs to call and let me know,” says Kay. “I went away to school too, so I understand what it's like to be away at school and have freedom and come home and have rules.”

Odom doesn't set a curfew, preferring to let the occasion dictate the time Winton should be home. But she says she does expect Winton to tell her where she's going, with whom and what time she'll be home – something Winton forgot when she first returned home last year.

“When I asked her what time she'd be home, she said, ‘Why? Why do you need to know?' And then she told me, ‘Nobody tells me what time to come in when I'm at school. I make my own rules. I'm an adult.'

Winton laughs recalling the conversation. “I guess my excuse wasn't cutting it,” says Winton, who's majoring in chemical engineering.

Curfew is not the only concern, says Cindy Hellman, assistant director of residence life at Michigan State University.

Hellman says when students return to school, she and other staff often hear complaints about living at home again.

The other area of disagreement centers on how the student spends his or her time.

“The family expects they'll be home every night for dinner and watching TV with their little brother after dinner and the student wants to go out and socialize with friends,” she says.

Students say they appreciate their parents, even if they don't always agree with them.

“I do remember getting into arguments with my parents because I wanted to have more freedom to come and go as I pleased, but in hindsight, it makes sense that my parents show their worries,” Rachel Kay says. “After all, they are parents. They are here to worry about us.”

Campus News
‘Adulting’ is hard. UC Berkeley has a class for that
588 views