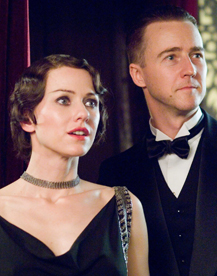 Reel Talk with Stephen Farber-which is now based at the Wadsworth Theater in Los Angeles-continues its fall season on Monday, Dec. 11 with a special screening of The Painted Veil , which opens in limited release Dec. 20.

Based on the novel by W. Somerset Maugham, Painted Veil is set in the 1920s between England and Shanghai. In the film, a young English couple-Walter (Edward Norton), a middle class doctor, and Kitty (Naomi Watts), an upper-class woman, get married for the wrong reasons before relocating themselves to Shanghai. While there, she falls in love with someone else.

He eventually uncovers her infidelity and, after doing so, takes her along when he takes a job in an epidemic-ridden area of China. Once there, they begin to discover the hidden meanings in their relationship. The film is directed by John Curran, and also stars Toby Jones and Liev Schreiber.

Following the Dec. 11 screening (which begins promptly at 6:30 p.m.), Farber – the film critic for Movieline's Hollywood Life and frequent contributor to both the Los Angeles Times and New York Times – will host a special Q&A session with director Curran, screenwriter Ron Nyswaner and star Edward Norton.

Wadsworth Theatre is located at 11301 Wilshire Blvd., in Brentwood. Tickets are $17 per person ($6 per students with valid ID) per screening. The next screening will be The Blood Diamond on Tuesday, Dec. 12, with Director Edward Zwick as the guest speaker. For more information, visit www.richmarkent.com.