Heath Ledger: Abandons a Surefire Career for one Fraught with Risk 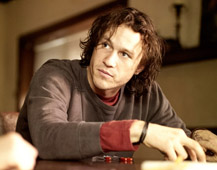 He was in line to become Hollywood's next top romantic lead, a blossoming hunk primped for mainstream superstardom.

Australian actor Heath Ledger seemed positioned as the next “it'' boy after such box-office hits as The Patriot in 2000 and A Knight's Tale in 2001. But when most of his contemporaries were struggling with college midterms, Ledger was doing the unthinkable: abandoning a surefire film career for one dotted with commercially risky roles.

This conscious change in course perhaps culminated in Brokeback Mountain , for which Ledger received a 2006 Oscar nomination for his portrayal of a ranch hand secretly in love with a bull rider (Jake Gyllenhaal).

Now Ledger, 27, has taken on another audience-testing role in Candy , a dark memoir about a young couple locked in a death tango with heroin. The film also stars Geoffrey Rush and Abbie Cornish.

“I think it was more or less the time I decided to take my career into my own hands,” Ledger says. “I felt like it was a little out of my control. I'm happy I made that choice. I feel less like a product and more like someone who is kind of devoted to telling stories about all walks of life.”

In Candy , Ledger plays Dan, a poet who falls for a striking young art student (Cornish). Their passion for one another becomes entangled with an all-consuming need for heroin, which inevitably envelops their relationship.

Co-star and fellow Australian Rush is familiar with embracing such edgier parts. Along with playing Barbossa, Johnny Depp's bane in the Pirates of the Caribbean series, he plays Casper, Dan and Candy's impish dandy of a drug mentor.

By working on Candy , a small Australian film that has only a limited release in the United States, Ledger continues to bravely buck industry expectations, Rush says.

“He was kind of taken on as bright new face and branded as a certain kind of matinee idol,” Rush says. “I'm very much aware that he wants to deepen the experience of his curriculum vitae. And I think he's been quite radical in laying down some pipe work for a healthy, unpredictable but interesting career.”

Ledger chose to work on Candy not only because it plunged into territory of such unfamiliar darkness; the movie, shot in Sydney, also gave him the rare opportunity to make a film in his homeland. As a result, it was his first film in eight years where he didn't have to affect an accent.

Within two years of catching the attention of American audiences in 10 Things I Hate About You in 1999, Ledger's performance in the racially charged Monster's Ball set the tone for his choices in often offbeat, art-house movies. Such films as Ned Kelly and The Brothers Grimm followed suit.

In his next film, Todd Haynes' I'm Not There , he plays one of seven characters who embody an aspect of Bob Dylan's life and work – hardly the stuff of multiplexes.

Though he appears to be following singing songwriter Neil Young's career path of forsaking the middle of the road for the ditch – leading to the rougher but far more interesting ride – Ledger hasn't completely turned his back on popcorn movies. He will play the Joker in The Dark Knight , Christopher Nolan's follow-up to Batman Begins , which begins shooting in March.

The actor says that in spite of the box-office potential of Knight , he's intrigued more by the role, which he describes as a “pure anarchist.”

“I still feel like it's a character I've never done before,'' he says, “and I'm going to be donning a mask. I'm not really thinking about the commercial consequences. Maybe I should be. But at this point, it's just an exciting next step.”

Candy is currently in select theaters.